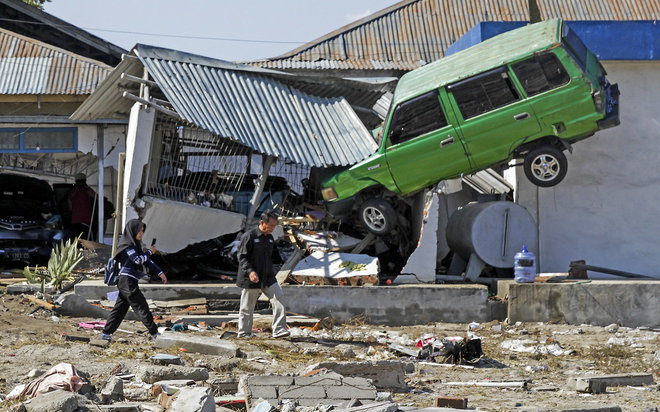 Indonesia’s devastating double hit from a powerful earthquake that in turn triggered a gigantic tsunami has now killed thousands after dozens of students found dead in church.

Over the weekend the official figure for confirmed dead hit 1’234 and continues to rise rapidly as the week progresses. By Monday morning this figure was already 1’351 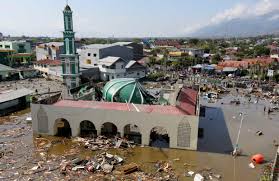 Quarter of a million survivors are in need of urgent assistance as looting and unrest grows in areas lacking essential supplies such as food, water, shelter, rescue equipment such as shovels and medicines.

Indonesia’s death toll from the earthquake and tsunami which struck on Friday has rose to 1’234 over the weekend, and 1’351 by Monday morning according to officials.

The figure cintinues to grow at an alarming rate as the week progresses.

The figures come after the bodies of 34 students were found in a destroyed church which was hit by a landslide during a bible camp in the mountainous Sigi Biromaru region of Muslim Indonesia.

The Indonesian government has begun mass burials for victims, most found in the city of Palu.

Five days after the quake, survivors have said they have been forced to loot food, water, medicine and shovels from shops as supplies have not been arriving in many stricken areas.

The community of Balaroa has received no government help and anger and unrest  is simmering among its residents.

Many people are believed trapped under shattered houses in the area, where the earthquake caused the ground to heave up and down violently. One official described the twisted buildings and rubble as looking like the town had been “blended”.

“I and about 50 other people in Balaroa were able to save ourselves by riding on a mound of soil which was getting higher and higher,” resident Siti Hajat told local Television News reporters, adding her house was destroyed.

Journalists have made it to the city which the government and military have yet to reach.

On Monday about 3’000 residents flocked to Palu’s airport, trying to board military aircraft or one of the few commercial flights using the facility only partially operating due to damage.

Video showed some of them screaming in anger because they were not able to get on departing military planes.

“We have not eaten for three days!” one woman yelled. “We just want to be safe.”

Nearly 50’000 people have been displaced from their homes in Palu alone, Nugroho said, and hospitals were overwhelmed.

According to the UN almost 250’000 people are now in need of urgent assistance.

On Monday night four more earthquakes measuring between 5.0 and 6.0 magnitude hit Indonesia near Sumba Island over 700 miles away from north Sulawesi where Friday’s quake struck.

Victims in several areas including Sigi and Balaroa are yet to be counted, meaning the death toll is expected to rise further.

The Indonesian air force confirmed a Hercules aircraft carrying an unspecified number of survivors was able to leave Palu for South Sulawesi’s capital of Makassar.

More than 100 police officers from the capital, Jakarta, were sent to Palu and additional Hercules aircraft carrying soldiers and supplies, including food and water, from east Java were en route, local television reported.

Indonesia is no stranger to large earthquakes and tsunami’s with the infamous 26 December 2006 tragedy killing more than a quarter of a million people.

These 5 earthquakes in succession coupled with the tsunami have however left the government unable to cope with the geographically wide spread demand for urgent aid.