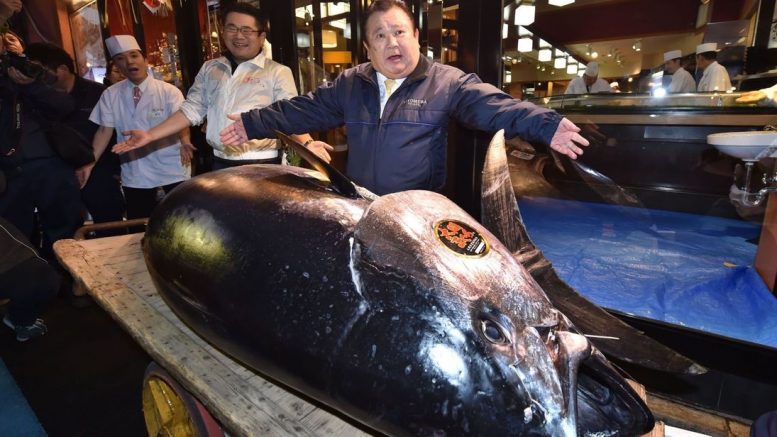 The prized tuna was the star attraction at the first auction of 2019 at the city’s new fish market.

A Blue fin tuna has sold for a record $3.1m USD (333.6 million yen) at a Tokyo market – but the buyer has admitted he may have got a bit carried away.

The fish weighed a hefty 278kg and was bought by Kiyomure Corp, whose owner Kiyoshi Kimura runs the Sushi Zanmai chain.

He told Japanese TV he was surprised by how much the fish went for at the early morning auction.

“The tuna looks so tasty and very fresh, but I think I did too much,” Mr Kimura said.

“I expected it would be between 30 million and 50 million yen, or 60 million yen at the highest, but it ended up five times more.”

It was caught off northern Japan’s Aomori prefecture and sold on Saturday at the first auction of 2019 at the city’s new fish market.

The market opened in October and replaces the old Tsukiji market, one of Japan’s most popular tourist destinations.

The Japanese are the biggest consumer of Bluefin tuna and experts warn the species could become extinct because of overfishing.

They say stocks of Pacific Bluefin have depleted by 96% from pre-industrial levels.

However, Japan and other governments are backing plans to rebuild stocks back to 20% by 2034.

Blue fin tuna became the most popular and expensive fish in the world by the start of 2019.