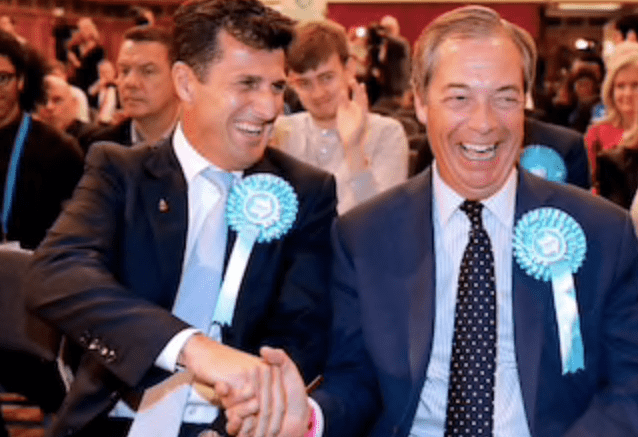 Robert Rowland, a British Member of the European Parliament (MEP) says vessels as far away as Bay of Biscay should be “given same treatment as Belgrano”.

A member of Nigel Farage’s far right Brexit Party and MEP, Robert Rowland, has called for the Royal Navy to sink EU fishing vessels that enter a 200 mile exclusion zone around the United Kingdom and any UK claimed land. (Such as the southern tip of Spain, Gibraltar)

The threats are being taken as genuine and serious after the British navy attacked and captured an Iranian oil tanker off the south coast of Spain in waters claimed by UK’s Gibraltar territory. The British Navy also sent war ships into the Strait of Hormuz to confront Iranian vessels directly.

Rowland’s policy would see EU boats as far away as France’s Bay of Biscay and Morocco attacked by British warships. The 200 miles exclusion zone would also include a number of EU capitals and major cities such as Paris, Brussels, Amsterdam, and Dublin.

A proposed 200 mile exclusion zone would see the UK effectively attempt to annex territory from a large number of EU and non EU sovereign nations.

Robert Rowland, an MEP for South East England, said EU vessels that entered the exclusion zone would be “given the same treatment as the Belgrano” – an Argentinian warship that was torpedoed by a British submarine during the Falklands War with the loss of 323 lives.

“We are behind all our fisherman and the restoration of sovereignty over our waters. 200 miles of exclusion zone with any foreign fishing vessel given the same treatment as the Belgrano!” he said in a post on Twitter.

The proposal immediately attract derision and criticism from the European Parliament, other MEPs and fishermans’ groups.

Nations on the fence between the UK and Iran may see the unhinged and illegal threats as the tipping point to take defensive policies against UK aggression.

“Even as hyperbole they are shameful and sickening,” he said. “No doubt the Brexit Party will claim that it was never the intention to call for European fishermen to be murdered.

“But words matter. Words can calm and promote understanding, or they can inflame and inspire hatred. The Brexit Party is making it clear where it stands, and its position is vile.”

The National Federation of Fishermen’s Organisations also condemned the comments, stating that after Brexit they expected an agreement to be put in place to allow EU vessels to have access to British waters.

The sinking of the ARA General Belgrano on 2 May 1982 is one of the most controversial incidents in recent British military history. The sinking was personally ordered by then prime minister Margaret Thatcher and it is disputed whether the vessel was returning to port at the time it was attacked. The attack of a non-combat engaged, retreating vessel returning to port would constitute a war crime.