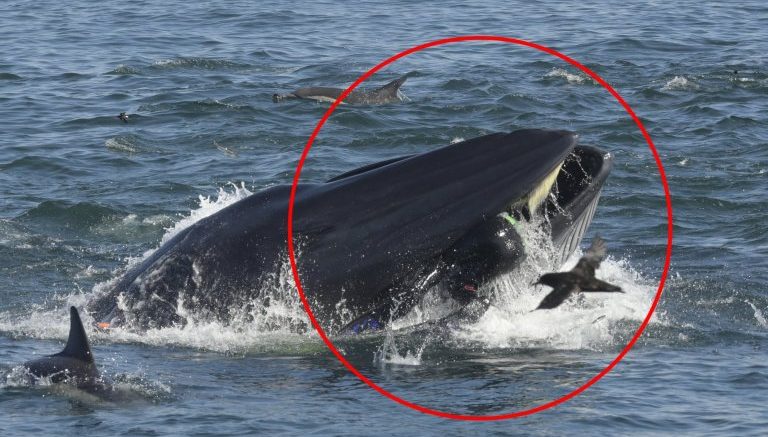 Director of Dive Expert Tours, Rainer Schimpf, 51, from South Africa, had set off with his team of divers to document a sardine run when events took a surprising turn off Port Elizabeth Harbour, east of Cape Town.

Schimpf and his team, who had split into two groups, had been documenting a natural event which sees the likes of gannets, penguins, seals, dolphins, whales and sharks come together to capture large quantities of fish.

The situation has been compared to the biblical story of Jonah, who was said to have lived inside a whale for three days before being spat out.

Luckily Rainer’s experience was much shorter – and astonishingly all of it was captured on camera by his friend. The team was 25 nautical miles from shore, trying to film a shark going through a bait ball when Rainer said his surroundings became dark and he felt the large whale trying to grab hold of his body. Rainer Schimpf in the mouth of the Bryde’s Whale.

Rainer an experienced diver, who has been a dive tour operator for more than 15 years, described when he was sucked into to the whales mouth how everything went black. Rainer is now back on dry land. He recalled: ‘I could feel the pressure on my hip, there is no time for fear in a situation like that – you have to use your instinct.’ ‘Nothing can actually prepare you for the event when you end up inside the whale – its pure instinct. ‘I held my breath because I thought he is going to dive down and release me much deeper in the ocean, it was pitch black inside.’ Fortunately after a few moments, the whale spat out Rainer, 51, and went back to eating fish. Rainer was able to swim back to safety unharmed as his crew watched on in shock.

The astonishing scenes were caught by Rainer’s colleague and photographer Heinz Toperczer, who kept the camera focused on his buddy from the team’s boat.