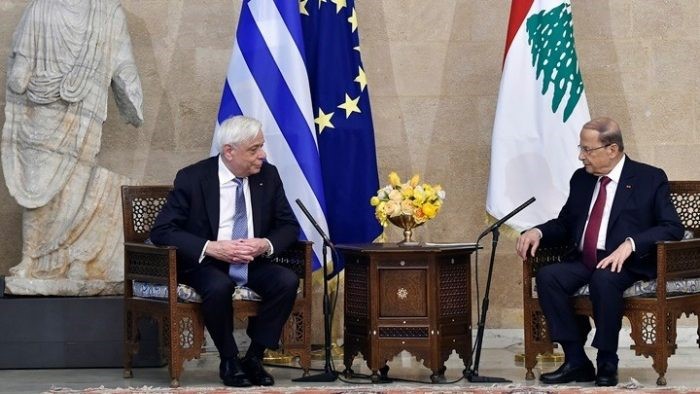 The President of Greece, Prokopios Pavlopoulos met with his counterpart, General Michel Aoun in Beirut  as part of his two-day official visit to Lebanon

“Our great European family has not assumed the part of its responsibilities, based on its history and culture, as far as it concerns the war in the Middle East with significant consequences on the people and their fundamental rights,” President Pavlopoulos noted, referring to the ongoing wars in Syria, Yemen, Palestine and elsewhere across the region.

“Our countries and our peoples resist this lack of communication and mutual understanding bravely and decisively,” the Greek President noted. Pavlopoulos added that the bilateral relations between the two countries are “a resounding answer to those who claim that there is a conflict of civilizations.”

President Pavlopoulos reiterated Greece’s position on the situation in Lebanon, saying that “Greece and the Greeks support a united, powerful and peaceful Lebanon, in a thriving eastern Mediterranean, where all its peoples will coexist together, building their common future together.”

The Greek president also referred to the trilateral cooperation between Greece, Cyprus and Lebanon, noting that it has already produced very positive results, and even more will follow.

Pavlopoulos will meet later with the country’s Prime Minister Saad Hariri, and tomorrow he is expected to visit the Greek Orthodox Patriarch of Antioch, John I.