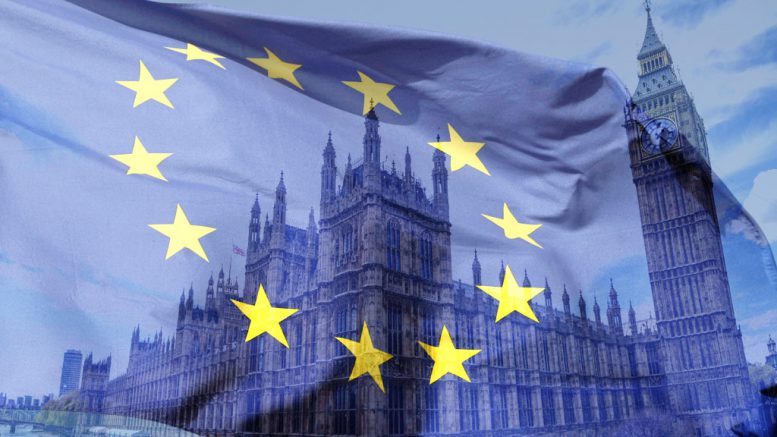 Following a week and weekend of intense public protests and promises by some politicians that Brexit can be stopped, UK Prome Minister Theresa May had today formally triggered Article 50, reducing the EU to 27 states and threatening the collapse and breakup of the UK.

The EU immediately responded with its first formal response: Britain will not be given a free trade deal by the EU, and with be frozen out and blocked from EU free trade deal negotiations for a minimum of two years. a further transition arrangement to cushion the UK’s exit can also last no longer than three years, a European parliament resolution has vowed, in the first official response by the EU institutions to the triggering of article 50 by Theresa May.

A leaked copy of the resolution, on which the EU’s chief Brexit negotiator, Michel Barnier, has been a close conspirator, lays bare the tough path ahead for Britain as the historic process of withdrawing from the trade bloc begins.

Spain, who had previously blocked Scottish independence from the UK, has also said it would now welcome an independent Scotland into the EU with open arms.

Across 11 pages of clauses, May is warned that the EU will stridently protect its political, financial and social interests, and that the position for the UK even during the transition period will be far  less positive that it has been before today.

A withdrawal agreement, covering financial liabilities, citizens’ rights and the border in Ireland, will need to be accepted by a qualified majority of 72% of the EU’s remaining 27 member states, representing 65% of the population.

The agreement would then need to be approved by the European parliament, voting by a simple majority.

Barnier has said that any free trade deal, to be struck after the UK leaves, would be a “mixed agreement” requiring ratification by the national parliaments of the 27 states, plus consent by the European parliament.

Sir Tim Barrow, the UK’s permanent representative to the EU, delivered a letter to the European council president, Donald Tusk, at 12:30 notifying the EU of Britain’s intention to leave, as May stood up in the House of Commons to make a statement to MPs.

It is understood that Tusk will then make a statement announcing that the EU will come together to adopt “overall positions and principles in light of which the union, represented by the European commission, will negotiate with the United Kingdom”.

Tusk is expected to say: “In these negotiations the union will act as one.”

Tusk is expected to add that “should the negotiations fail, we will make sure that the European Union is ready for such an outcome even though we do not desire it”.

The European parliament’s resolution, which is understood to echo the thinking of the European commission and the European council, whose members comprise the 27 remaining EU states, says Brexit will be an “unprecedented and regrettable event as a member state has never left the European union before” but that “this exit must be arranged in an orderly fashion so as not to negatively affect the European union, its citizens and the process of European integration.”

Many mistakenly believe in Britain, that Iceland left the EU. Iceland applied to join the European Union on 16 July 2009 and formal negotiations began on 27 July 2010. However, on 13 September 2013 the Government of Iceland dissolved its accession team and suspended its application to join the EU.

The EU was formed with the intention of being a one way membership to form unity, create stability and avoid war. In essence creating a USA style federation across Europe but allowing greater autonomy and diversity between states at the same time.

The UK is the only member to have ever left and is most likely going to be made an example of to  desuade others from attempting to do so.

Many of London’s of firms have already left he UK for better grounds in the EU with hundreds more planning to move during the interim period of adjustment.

With a now volitile and weakened currency, economy, housing and jobs market the UK will struggle to intise the talent and investment it so desporatly requires.

The UK may also struggle to remain a country, with the constituent nations of Scotland, England and Wales possibly separating a reunification drive for occupied Northern Ireland to be surrendered back to Ireland and a London independence bid, the UK has never looked so fragile since it’s formation hundreds of years ago.

The chamber’s general principles for the coming talks include that:
● a future relationship agreement between the European union and the UK “can only be concluded once the United Kingdom has withdrawn from the EU”.
● there may be a transitional deal for after 2019 to ensure that custom controls and barriers on trade are not enforced on day one of Brexit, but that these arrangements should not exceed three years and will be “limited in scope as they can never be a substitute for union membership”.
● the European court of justice will be responsible for settling any legal challenges during the transition period.
● the UK will be able to revoke its notification of article 50 but this must be “subject to conditions set by all EU27 so they cannot be used as a procedural device or abused in an attempt to improve the actual terms of the United Kingdom’s membership”.
● should Britain seek to negotiate any free trade deals with other countries while it is still an EU member state, there will be no future discussion of a deal with the union.
● there will be no special deal for the City of London “providing UK-based undertakings preferential access to the single market and, or the customs union”.
● the cut-off date after which EU nationals coming to the UK lose the automatic right to residency in the UK must not be before 29 March 2019, when the country leaves the EU, or the British government will be breaking EU law.
● Britain should pay all its liabilities “arising from outstanding commitments as well as make provision for off-balance sheet items, contingent liabilities and other financial costs that arise directly as a result of its withdrawal”.
● the outcome of the negotiations on the future EU-UK relationship “cannot involve any trade-off between internal and external security including defence cooperation, on the one hand, and the future economic relationship, on the other hand”.

The European parliament’s resolution will have the right to veto any deal in 2019, and it has been working with the European commission on setting out the acceptable parameters for the negotiations in this first intervention.

The resolution, which will be voted on next Wednesday in Strasbourg, calls for the EU’s remaining 27 member states to “act in unity in the defence of the European union’s interests and its integrity”.

It suggests the model for the future could be a form of associate membership, currently enjoyed by Ukraine.

Ukraine is granted some highly limited market access under its deal but it is not subservient to EU law or the European court of justice although does have to abide by EU political and military obligations such as access to military bases.

Neither does the arrangement require the observance of free movement rules and it allows Ukraine to negotiate its own free trade deals.

However, it would require “a substantial payment” to the EU budget by the Treasury, potentially as much as half of as much as it pays today, according to a recent study of this model by the Centre for European Policy Studies thinktank.

The association deal with Ukraine also allows collaboration on foreign and defence policy and on fighting crime and terrorism. Along with cash payments, the EU gets unfettered access to the Ukrainian market, military bases and some influence over domestic and foreign political policies.

However, the European parliament resolution says that without a withdrawal agreement on citizens’ rights, the financial settlement and the border in Ireland, the UK “would exit automatically the union on 30 March 2019 in a disorderly manner”.

It adds that any future agreement between the EU and the UK is conditional on May’s government continuing to adhere to “the standards provided by the union’s legislation and polices, in among others, the fields of environment, climate change, the fight against tax evasion and avoidance, human rights, corruptions, fair competition, trade and social policy”.

The parliament’s resolution also nods towards the hope of Guy Verhofstadt, its Brexit point man, that UK citizens will be able to apply individually to retain EU citizenship rights, although it is vague.

It says: “Many citizens in the United Kingdom have expressed strong opposition to losing the rights they currently enjoy.” The MEPs “propose that the EU-27 examine how to mitigate this within the limits of EU primary law whilst fully respecting the principles of reciprocity, equity, symmetry and non-discrimination”.