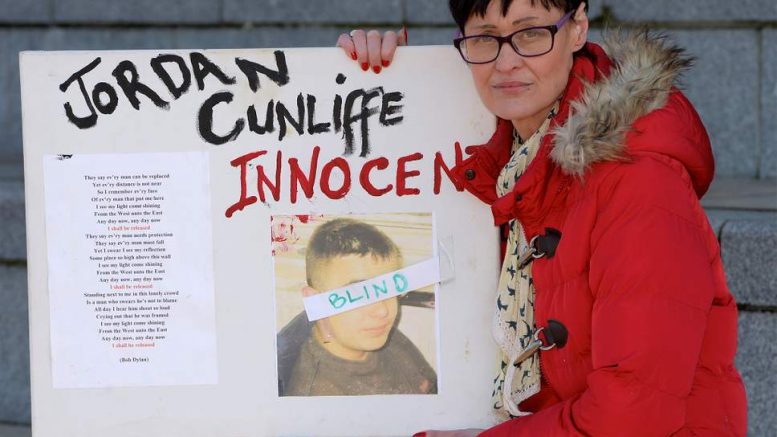 UK Teenage Gangs: A blind teenager convicted of murder after a dad-of-three was kicked to death is soon to be released later this year

Jordan Cunliffe was convicted of Garry’s murder despite claiming he was registered blind at the time.
The blind teenager was convicted of murder after a father-of-three was kicked to death. Cunliffe is now soon to be released later this year (2019).

Jordan Cunliffe, who insists he could not even see the attack in which Garry Newlove was murdered outside his home, has battled to clear his name for years.

The prosecution never gave his eye condition any consideration during the trial,” his mother said. “They just said because he could kick a football, he was capable of killing a man. There was never any credit for his disability.”

His lack of vision, and the speed of the attack, means he would have had no knowledge of what was to happen, so he can’t be guilty, she argues.

Earlier this month, he lost an appeal at the UK High Court to quash both his conviction and sentence after judges found there was “ample evidence” he was party to the gang attack back in 2007.

Now 27, the youngster from Warrington, England, UK, was just 15 when he was convicted under the laws of Joint Enterprise in a case which made headlines around the world.

Cunliffe and his family claim he was registered blind at the time of the brutal assault in August 2007 and “did not hear or see anything.”

But he was found “guilty by association” at Chester Crown Court in the North West of England near the Welsh border, of killing Mr Newlove who was “kicked like a football” after confronting youths over damage to his wife’s car.

The 47-year-old salesman was left unconscious in the street, having suffered massive head injuries, and died in hospital two days later.
Cunliffe’s mum Janet, who is a prominent JENGBA (Joint Enterprise, Guilty by Association) campaigner, has taken part in regular demonstrations outside courts in the North West over the case.

Joint enterprise allows the prosecution of members of a group or gang for murder when it cannot be proved which member of the group inflicted the fatal blow.

The law has prevented countless gangs murders in the country’s violent capital,. London from going unpunished as they otherwise would be without the law.

She told the Liverpool Echo :

“Jordan came up to the scene as it ended. He was last coming up the street and didn’t even hear or see it. He has a wee in some bushes and hears a commotion.[SIC]”

“It’s only later when he realises one of his friends who has done it [the attack]. It was a single blow that killed Garry Newlove. At the time, Jordan was registered blind and needed transplant surgery in both eyes. He had less than 10% vision. It had got so bad that he couldn’t wear contact lenses and his only option was transplant surgery. It was 10.30pm so it would have been dark. One of the things about Jordan’s condition is that, if there’s street lighting, you don’t see that light, and it explodes like fireworks…it’s quite a chaotic picture. Jordan would have had to navigate through all of that. The chance of seeing individuals was impossible. He first heard someone crying, ‘Who’s done this?’ He walked towards the voice and a woman, who we now know is Zoe, Garry’s 19-year-old daughter, who asks if he knows who has done this. He then bumps into police and gives them his name and address – if he’d just battered a man to death he wouldn’t have done that.”

Supporters of the joint enterprise point out numerous issues with being involved in a gang that had damaged the vehicle before the murder, discrepancies over the time of sun set in British Sumer (usually very late) and disputes over the extent of Cunliffe’s “blindness” if he was able to go out, function and urinate in a bush without any aids or a visual aid stick.

Opponents of the joint enterprise laws point out that having diminished visual abilities regardless of severity and arriving at the scene once the beating has commenced should have been taken into account on sentencing.

Cunliffe was convicted of murder, and under Joint Enterprise laws he was sentenced to serve a minimum of 12 years behind bars. Life in the UK comes with a minimum terms after which the individual can apply for parole once every two years. They remain subject to regular probation meetings, police checks and restrictions of liberty indefinitely.

He has almost completed that tariff, and is currently housed at a prison in the North West.

Barring the unexpected he will be freed after August, and is set to leave the region to begin his life on the outside.

He has since had transplant surgery in his left eye but is said to now have zero vision in his right eye.

On the night of the attack, Mr Newlove left his home, barefoot, to remonstrate with a gang who had smashed the window of a digger parked nearby and damaged his wife’s car.

Janet Cunliffe has always claimed son Jordan’s conviction was a miscarriage of justice and still campaigns to this day. Although the UK High Court has rejected all appeals.

Al-Sahawat Times does not publish names of suspects or perpetrators of crimes without exceptional reason. However Mrs Cunliffe wishes to raise awareness of joint enterprise cases in the UK to try and kickstart a judicial reform of the way the law is actioned against those with disabilities.

Mr Newlove’s daughter Amy, who had been reading in her bedroom, had called him after looking out of her window and seeing a youth kicking her mother’s car.

Police initially arrested 25 youths in the aftermath of the killing with minimum terms ranging from 12 years to 17 years.

50-year-old Janet believes Britain must alter legislation which sees children able to be handed life sentences, saying: “He doesn’t want to move back to Warrington, he wants to go and get on with life.

The police justify their ability to hand life sentences to under 18s with the statistic that most murders in the UK’s globally famous violent capital, London are committed by under 18s.

“There’s a couple of universities who have offered him a place. He wants to catch up with his lost youth. Jordan isn’t on his own. There’s 1,000 people in exactly the same [Joint Enterprise] position. A boy 12 years old is the youngest person serving a life sentence in Britain.”

Garry Newlove’s family say it is ‘painful’ to know the killers are soon to be released and do not accept that under 18s should be exempt from joint enterprise, gang violence or life sentences.

Since her husband’s death, she has since been made a Conservative peer and was appointed the Victims’ Commissioner by the government in 2012.

She has campaigned herself for a “victims law” giving families the right to be informed and to challenge decisions to release criminals.

Speaking in May last year ahead of the expected release of Cunliffe and Sorton, she said :“Release is a painful part of the victim journey. You know it must happen but it does not make it any easier. It’s just so painful.”