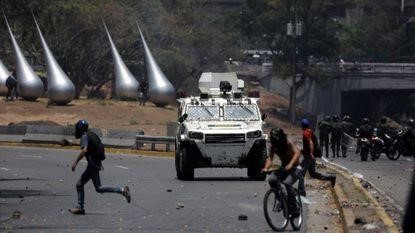 The White House struggled Thursday to salvage its public and covert campaign to oust the leftist president of Venezuela after the U.S.-backed opposition in Caracas sought to overthrow him this week, but failed and appeared to be losing support.

After more than five months of pushing Venezuelan President Nicolas Maduro to step down or leave the country, offering inducements to his military to switch sides, the Trump administration scrambled to find viable options to avoid an embarrassing foreign policy defeat.

The impasse has frustrated top White House officials, including national security advisor John Bolton. An intense debate appeared underway over whether the U.S. military should be used to raise pressure on Maduro, with senior Pentagon officials warning an armed intervention would be counterproductive.

Administration officials said secret talks had broken down with some of Maduro’s top aides in the effort to arrange his exit and organize a transition to democracy under Juan Guaido, the self-declared interim leader backed by the U.S. and many other nations.

Maduro appeared on Thursday at an army base in Caracas flanked by soldiers in what appeared a show of defiance. He called on his troops to resist what he called “coup plotters.”

U.S. officials said the Pentagon’s Joint Staff and Southern Command, which oversees U.S. military operations in the Southern Hemisphere, have given the White House an array of options for potential military action.

Possible steps include U.S. naval exercises or deployments of warships outside Venezuelan waters, delivery of humanitarian aid into the country, and more military contacts with neighbouring countries to try to enlist their support for joint action.

Adm. Craig Faller, head of Southern Command, said the Pentagon was also “carefully looking at plans” to expand an embargo on Cuba, as Trump suggested in a tweet this week, to erode Havana’s support for Maduro’s government.

One question raised by the White House is whether the Pentagon could turn up pressure on Russia and Cuba to cut off their support for the Maduro regime. Russia has accused the Trump administration of violating international law in Venezuela, and Trump has rolled back an Obama-era outreach to Cuba.

U.S. military officials have argued against direct intervention. For the moment, officials say, there is no indication that Trump wants to commit U.S. troops to support the Venezuelan opposition, but more modest steps are possible in the coming days.

The debate between reluctant Pentagon officials and more aggressive White House aides over possible intervention has been heated at times. Pentagon officials said they may be ordered to get more involved, raising the risk of broader violence in the region.

“We’re doing what we can now to collect intelligence and make sure we have good visibility on what’s happening down in Venezuela and also be prepared to support the president should he require more from the U.S. military,” Marine Gen. Joseph Dunford, chairman of the Joint Chiefs, told the House Defence Appropriations Subcommittee on Wednesday.

Shanahan, who also testified before the panel, added: “When people say all options are on the table, they literally are. We’ve done exhaustive planning. There’s not a situation or scenario that we don’t have a contingency for.”

A former senior administration official with deep knowledge of the region described this week’s events, when the Venezuelan opposition along with Bolton expected the Venezuelan military to turn against Maduro, as the Bay of Pigs II — a reference to the failed U.S.-backed attempt to invade Cuba and overthrow Fidel Castro in 1961.

“This makes the U.S. look weak and unserious, and pushes toward some kind of intervention to make us look strong,” the former official said. “If you are Bolton, and you have walked President Trump down this blind alley … it would seem we are moving ineluctably toward armed intervention.”

Bolton and the administration’s chief envoy for Venezuela, Elliott Abrams, this week named several potential defectors from Venezuela’s upper governing echelons, including the defence minister. They then conceded that the group ultimately did not come through on their supposed promises to abandon Maduro and join Guaido.

On Tuesday, Guaido made a dramatic appeal for the military to revolt against Maduro. He posted a video of himself with a number of men in uniform and said he had the support of “brave soldiers” in Caracas.

But security forces managed to break up street protests, and a senior opposition leader, Leopoldo Lopez, who had emerged from house arrest and appeared beside Guaido, later sought refuge with his family in the Spanish Embassy. Venezuelan officials announced a new arrest warrant for Lopez on Thursday.

Analysts say the Trump administration has misread the dynamics of the Venezuela crisis. They said the White House underestimated Maduro’s resilience and fostered unrealistic expectations about the ease of regime change, partly by trusting apparently duplicitous Venezuelan military officials.

“They have made a series of terrible miscalculations,” said Michael Shifter, president of the nonpartisan Inter-American Dialogue, a Washington think tank that specializes in Latin America.

The U.S. effort appeared clumsy at best after Venezuelan Defence Minister Vladimir Padrino, whom Bolton had named as a potential turncoat, confirmed Thursday that he had been approached by unnamed opposition representatives who sought to turn him into a “mercenary” and lure him to their side.

“I was very insulted that they wanted to come and buy me off with a deceitful, stupid and ridiculous offer,” Padrino said at a nationally televised military ceremony Thursday with Maduro and numerous senior officers in attendance.

“They want to pay us as if one had no dignity,” he said. “Those who fell for that, who sold their soul as a soldier, are no longer soldiers.”
Critics said the Trump administration’s repeated ultimatums, hints of military intervention and threats to blockade Cuba could backfire by eroding broad international diplomatic support for the anti-Maduro forces, and by goading the Venezuelan armed forces to rally around him.
“This is characteristic of the neoconservatives who are running foreign policy now,” said David Smilde, an expert on Venezuela at the Washington Office on Latin America, a non-profit nongovernmental organization.

“They think they can huff and puff and put forth strong rhetoric … and the foe will back down. But time and again, that doesn’t happen. The sociology of authoritarian governments is far more complex.”

This was posted in the media by a United Sates Citizen condemning the USA administration on its foreign policy.
Please allow the people of Venezuela to determine their own destiny, without any interference, Sudan did and right now it appears they are on the right track. It is the prerogative of a people to determine who their leaders are and what type of Government they want. No country no matter how powerful has the right to interfere in the running of another Country, all your interferences have yielded no good results only terrorist organizations and people been killed by the thousands. So for once stay out of other people’s affairs.