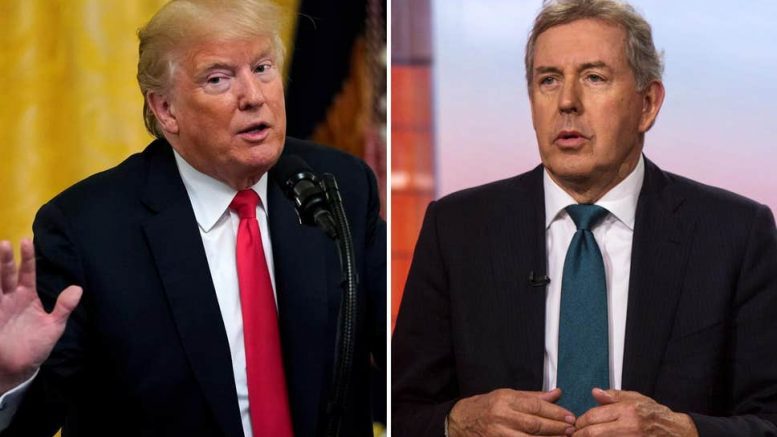 Earlier this week the UK’s already destroyed international reputation further took a nose dive when one of the UK’s closest allies, the USA summoned the UK ambassador over leaked memos.

Top British diplomat to the US, Sir Kim Darroch called Trump’s government, “Incompetent”, “Inept”, and “Dysfunctional” amongst a barrage of insults condemning the US government.

When UK politicians including Prime Minister hopeful Boris Johnson refused to back Darroch he was swiftly removed, officially offering his resignation. The UK now seeks to replace him with a pro-Trump ambassador.

The UK Counter Terror police however are now investigating the matter. The leak has been declared a publication of “official national secrets” and comes under the jurisdiction fo the Counter Terror Command.

The UK came under further condemnation from the US when Press were warned not to publish any leaked materials and to hand the materials into the police instead. The statement from the Met Police was seen by many in the US as a threat to members of the Press and an attempt to control and stop the Freedom of The Press granted under international law by United Nations Convention.

Former British chancellor of the exchequer, George Osborn has warned that the UK may be in breach of international laws for it’s handling of the Press over the leaks.

There have been reports of journalists having their Press Cards confiscated by the Met Police, it is unclear at this time if this is purely in relation to the leaks or not.

Sir Kim said the furore over the messages, in which he called the US president “inept”, was “making it impossible for me to carry out my role as I would like”.

According to Sky’s deputy political editor Sam Coates, Sir Kim “decided the game was up” when Boris Johnson refused to guarantee that he would stay in position if he became prime minister. The frontrunner to succeed Theresa May in Number 10 has been criticised for his remarks, although he said in the wake of the resignation that he regretted the departure of a “superb diplomat”.

Foreign Secretary Jeremy Hunt, Mr Johnson’s rival in the race for Downing Street, said he “profoundly” regretted Sir Kim’s resignation and was “outraged” at the leak.

“I think that the conduct of Boris Johnson has discredited him enormously in the eyes of many people in this country,” he said.

Sir Kim’s decision was revealed in a letter to Sir Simon McDonald, the permanent under secretary at the Foreign and Commonwealth Office.

Sir Kim said: “Since the leak of official documents from this embassy there has been a great deal of speculation surrounding my position and the duration of my remaining term as ambassador. I want to put an end to that speculation. The current situation is making it impossible for me to carry out my role as I would like. Although my posting is not due to end until the end of this year, I believe in the current circumstances the responsible course is to allow the appointment of a new ambassador.”

In the memos, which were published in the Mail on Sunday last weekend, Sir Kim described Mr Trump as “incompetent”, “inept” and “insecure”.

He also said the White House under America’s 45th president had become “uniquely dysfunctional” because of “vicious infighting and chaos”, and questioned whether it “will ever look competent”.