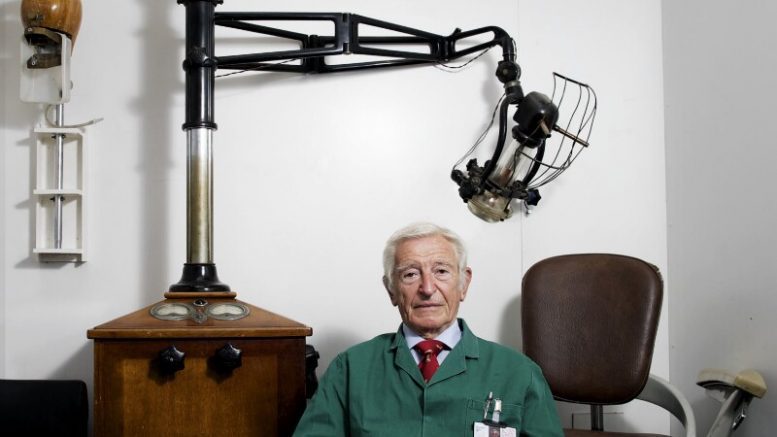 Professor Harold Ellis continues to work 5 days a week, 71 years after qualifying as a doctor

Professor Harold Ellis, 93, qualified as a doctor in July 1948 and began training as a surgeon as soon as the NHS opened, also in 1948. This means that astonishingly Dr Ellis, has been continuously working as a doctor slightly longer than the National Health Service has existed.

A dedicated doctor who began working as an NHS surgeon in the month of its inception continues to work as a medical professor five days a week, an astonishing 71 years later.

He has saved thousands of lives over the his seven decade career and is still working today as an anatomy teacher in the UK.

He is believed to be one of the longest serving medical professionals in UK history.

The grandfather-of-six said: “I couldn’t have done anything else with my life. I’ve dedicated my whole life to the NHS, I’m devoted to it. I thoroughly enjoyed my time working as a surgeon and I continue to enjoy what I do now.”

Harold ran the surgical unit at the now-closed Westminster Hospital alongside the top job of professor of surgery from 1960 until his retirement in 1989 when he took a teaching post at Cambridge University.

During that time he would operate on up to six patients four times a week, as well as seeing up to 40 patients per out patient clinic.

Since then he has been teaching anatomy at Guy’s Hospital in central London, opposite the Shard, by London Bridge station, as part of the University of London’s medical school staff and is full of admiration of the surgeons of the future.

He commutes there from his modest home in East Finchley on the Northen Line, each week day.

Professor Ellis reflected on his “fantastically enjoyable” career and the huge changes he has seen in the NHS over the years.

“There’s been tremendous changes. Expectations for health care are much, much higher. When I started working living until your sixites was seen as a great age. It you were in your seventies or eighties you should have been dead twenty years prior. People are living longer. And the price of everything has gone up including the cost of drugs and equipment. We have to face up to the fact health care is expensive. Do we want an NHS or do we want to pay for treatment? I’d much rather a new hospital than a new submarine for example.”

“The job of a surgeon is completely different, most of the illnesses I would have treated aren’t an issue anymore. And a lot of the things surgeons do nowadays I would never have done in my day.”

Professor Ellis also expressed his concern at the early age of retirement many doctors are now choosing to take – something not seen in his heyday.

“The other extraordinary thing that is happening is there are many people retiring at 59 as it is the earliest you can retire and get full pension. I didn’t know anybody who retired unless they were ill before 65 . We are losing the most experienced and respected people and they go into private practices and make more money.”

Prof Ellis was born in the East End of London in 1926 to Polish-Jewish parents, who worked as a barber and a dressmaker.

From St Olave’s Grammar School he gained a government scholarship and a place to read medicine at Queen’s College, Oxford.

He avoided being conscripted during the Second World War because of his studies and his first job was at the Radcliffe Infirmary, Oxford.

Surgeon jobs in hospitals in Oxford, Sheffield, Northampton and London followed before he started at Westminster Hospital.

Harold believes his ability to continue working for the seven consecutive decade is a testament to how much the NHS has improved the quality of people’s lives.

“In a past generation, statistically I should have been dead about 25 years ago. It used to be that someone of 75 was seen as an old man, nowadays people of that age are running marathons.”

Professor Ellis has been married to “wonderful and devoted” wife Wendy for 63 years, with whom he has two children and six grandchildren.

As for why he continues to work into his 90s, Professor Ellis joked: “My wife won’t let me in the house during the day, she likes to get me out in the morning!”