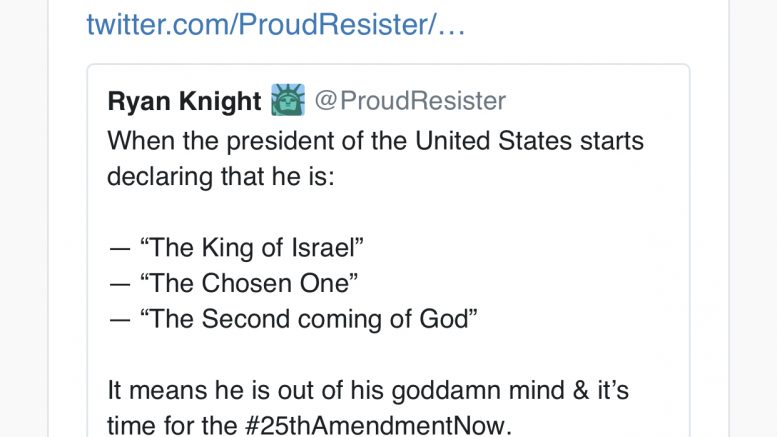 The #25thAmendment movement has spread across the globe at a striking rate following Trump’s latest deranged outbursts which have many in his own government seriously questioning his mental capacity to continue to hold office. 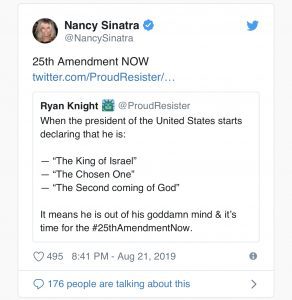 Twitter users in particular have been very vocal about the ’25th Amendment Now’ movement, following a series of extreme and nonsensical self proclamations.

The president’s critics want him out after a wild day even by 2019 standards.

President Donald Trump on Wednesday attacked a close economic, political and military ally for refusing to sell him part of its country, declared himself “the chosen one”, the “king of Israel” and the “second coming of God”. Statements which even his own far right Christian supporters in the US have been vocal to condemn as blasphemous and delusional.

Failing to understand perhaps that Israel and Denmark are not part of the US? Or that he is the President and not a King?

He also claimed he could singlehandedly change the 14th Amendment of the Constitution by ending birthright citizenship. Which is a constitutional right that can not be changed by any president alone. He perhaps forgets that his wife, and mother of his children was a Balkan immigrant when they married.

That was enough for many of his critics to demand action from within Trump’s own administration, calling on Vice President Mike Pence and the Cabinet to invoke the 25th Amendment to remove him from office due to severe mental incapacity. Hashtags such as #25thAmendment and #25thAmendmentNow are currently trending in multiple countries across many social media platforms.

The movement is not likely to succeed in outing the president, but does highlight the very real global concern for word safety as peace whilst Trump is in office.

His own government may have already limited his powers to launch nuclear strikes after his repeated threats to “nuke” Iran, Russia, China and North Korea”. But Trumps economic sanctions and unstable and extreme rhetoric have already been blamed on inspiring a record number of far right terror attacks across the US and Europe.