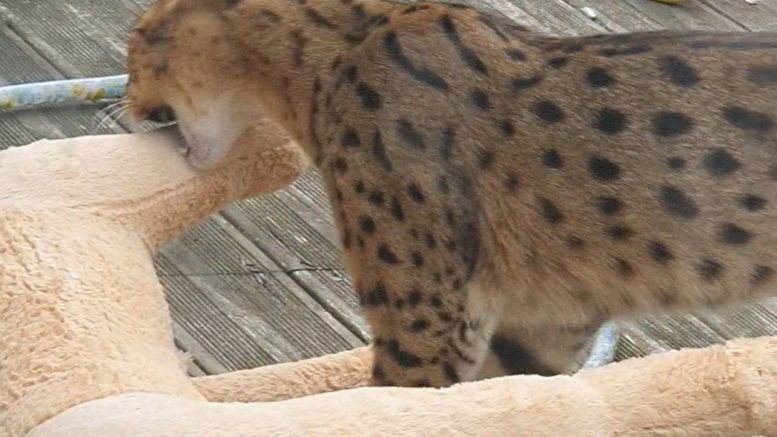 The problem is caused by people lying sometimes thousands of pounds for a designer cross bread only to realise that the wild nature is unmanageable when the animal reaches maturity. They dump the animal into the city to die. However the abundance of waste food and warm underground tunnels means the animals often survive, some times bread and even thrive.

The African Serval Wildcat cross breads have been reported stalking children, cats and dogs in play areas, parks and gardens across the capital.

Dr Neetu Nirdosh hurled a large children’s toy at ine such spotted beast as it snapped at the petrified young children in their garden in London.

The cat, thought to be a hybrid African Serval Wildcat, often called Savannah Cats, was on the loose last night as police were called in to investigated.

Neetu, of Hampstead, an affluent area of North London, found son Alexander, four and daughter Falcon, five, frozen in fear as the cat the size of a medium dog circled her children in the garden.

She said: “My heart was jumping out of my chest. As I ran outside I saw it pulling at Falcon’s jumper. It was taller than my children and was just circling them like it was working them out. It’s teeth were showing. I thought at first it was a cheetah — or something that had escaped from a zoo.”

The mum-of-four feared the children were about to be savaged, so she grabbed a large toy horse and hurled it at the animal in a bid to drive it away.

She added: “I screamed and threw a toy at it and pulled the children inside, shutting the glass behind me.”

The animals will be scared and looking for a means to survive the harsh British winters. Members of the  public are advised not to approach such animals and to call the local authorities should they encounter such a species. 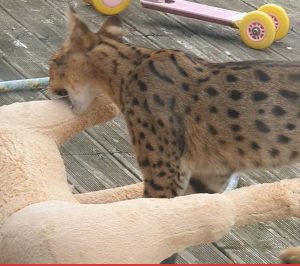 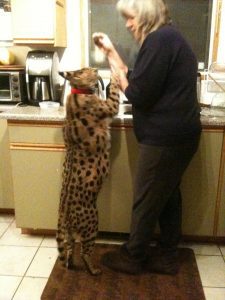 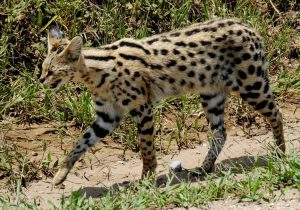 An African Serval Wildcat. The cats are approximately 18 KG, 50cm tall and can jump over 2 meters