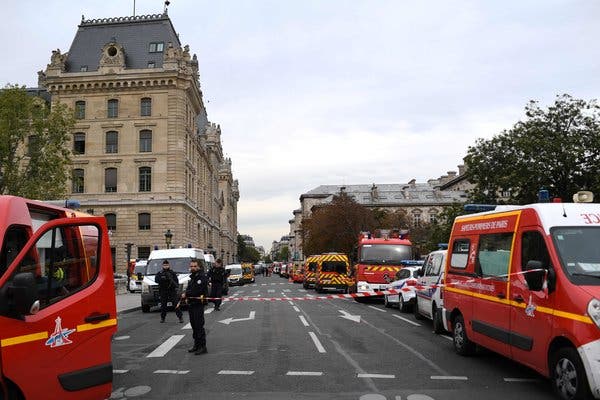 Paris police HQ knife attack leaves four officers dead, attacker was one of their own

Four police officers have died in a knife attack Paris police headquarters by a man who was then shot dead.

According to French media, the assailant was an administrative intelligence employee at police headquarters who was “deaf and dumb”.

The news that the attacker was one of their own employees was received in disbelief and shock by Paris residents who over the recent years like London residents have become accustomed to attacks from extreme groups of all different religious and political backgrounds.

French reports say the assailant went on the rampage with a ceramic knife, stabbing several colleagues in his own office and the surrounding area before being shot dead by a fellow officer.

Police sources told French media the assailant was “in conflict” with his superiors and that the murders were not being treated as a terror incident.

Christophe Crépin, spokesman for the union France Police Policeman in Anger, said: “I know this man. He worked in IT and he had long-running problems with his superior. He stabbed her first and then colleagues intervened and were stabbed as well. I am told he then got hold of a firearm.”

There are mono confirming reports that the attacker ever had or attempted to access any firearms. All injuries were caused by a ceramic knife.

The police headquarter’s on the île de la Cité has been cordoned off and emergency services and interior minister Christophe Castaner and prime minister Edouard Philippe, have arrived at the scene.

Union official Loic Travers said the attack on Thursday appears to have begun in an office and continued elsewhere inside the large compound across the street from Notre Dame Cathedral.

Mr Travers says the motive is unknown, but the employee allegedly responsible for the violence apparently never posed any problems before. A statement contradicting earlier reports suggesting the man was “in conflict” with his superior.

Both the accusation of use of a firearm and the accusation of conflict with a superior were made by the same man, Christophe Crepin, a spokesman for the union. Crepin refused to answer questions as to whether the attacker who suffered disabilities including the inability to talk to hear, as bullied at work.

Trabers says he can’t remember an attack on police officers of this magnitude.