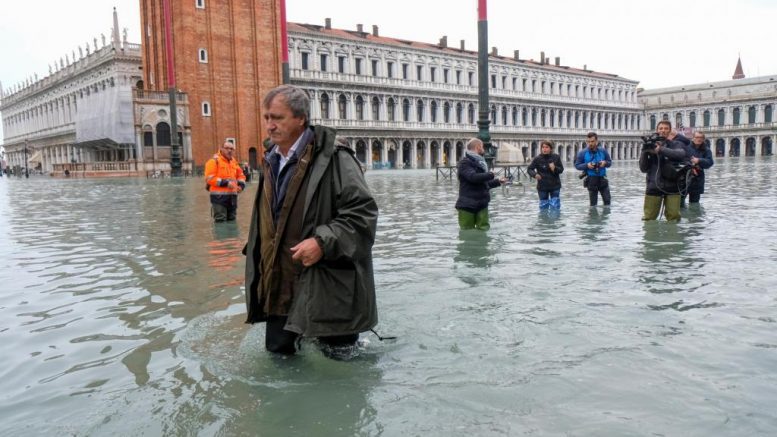 At 187 cm Venice is currently under water by the deepest water since the record 1966 194cm floods.

Flooding in the iconic city is becoming more frequent and more severe with rising water levels and sinking land mass the “floating city” is slowly but surly being washed away to the Adriatic-Mediterranean.

Whilst the public eye in Italy and over seas has very much been on Venice’s historic flooding of the city’s most treasured and iconic locations, such as St Mark’s Square. Local residents who live no the many small islands out of the tourist paths are angry that they feel abandoned and forgotten by the rescue efforts.

The city experienced a third exceptionally high tide in less than a week on Sunday, which came after the worst tide in more than half a century just five days earlier (187 cm).

But all this focus on protecting famous landmarks has left the people living on the smaller “off the beaten track” islands such as Pellestrina, one of the worst-affected islands in the Venetian lagoon, feeling forgotten, abandoned and desperate.

Many of the island’s 5’000 plus residents say the tourism industry of Venice has taken priority over them.

Vincenzo Vianello, 90, has spent all his life on Pellestrina. On Tuesday, he said he felt he was reliving the nightmare of a record-breaking flood in 1966 that completely submerged the entire island.

“We lost the fridge and kitchen that time and the same has happened again this time, everything in the house was flooded, we had to throw out everything again.” he said.

Mario Scarpa, another Pellestrina resident, broke his foot while trying to save his kitchen and appliances when the high tide broke through his walls and into the house.

“It was really scary because it all happened in the middle of the night,” he said.

“Suddenly a big wave burst into the house and all the electricity went off. I couldn’t see anything and in a few minutes I found myself on the floor.”

Mario’s son, Jacopo Scarpa, is angry. Pointing at the broken water pumps that should keep the island safe, he said: “They need to stop taking the piss out of us, we are pissed off.  The water pumps are not working and the maintenance is not good. We feel completely abandoned as we always end up cleaning and managing everything by ourselves.”

They say their needs remain in second place behind the tourist industry of Venice and its famous architecture, and they are asking whether protecting the city’s history should take priority over the lives of the local residents.