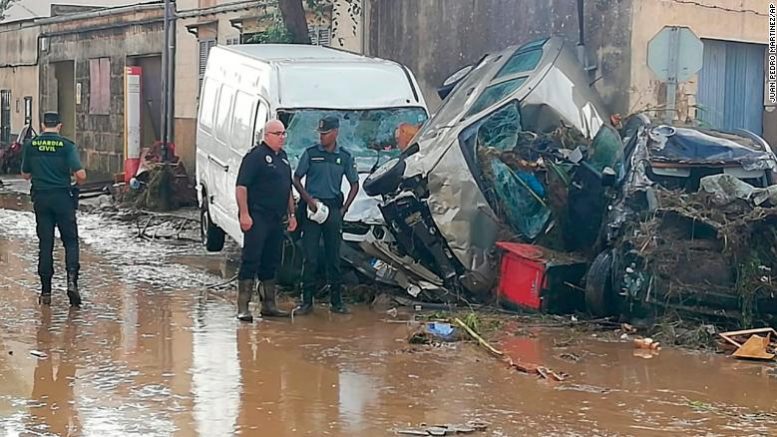 At least 10 people, have been killed after torrential rain caused flash flooding on the Spanish island of Mallorca.

A spokeswoman for the Balearic islands’ emergency services said two Britons and a Dutch woman had also died in the flooding of the town Sant Llorenç des Cardassar. Other victims were found in Artà and the coastal town of S’illot.

Police officers continue their search for survivors on a beach in S’illot.

Local emergency services, whose rescue efforts were supported by specialist military and police units, said 10 people had been killed in the floods with several still missing.

The Spanish prime minister, Pedro Sánchez, flew to the island to offer support to the emergency services, and announced that Sant Llorenç would be declared a disaster zone.

He offered his condolences to the victims’ families and said the area “can count on the government’s support in getting back to normal as soon as possible”.

“It all happened in less than 10 minutes,” an unidentified witness explained “We had to swim to try to survive.”

Videos showed cars being washed away in fast-moving, muddy water more than a metre deep.

Footage of the aftermath in Sant Llorenç showed dozens of damaged and upturned vehicles, many of them covered in debris.

Officials said more than 600 rescuers and medical staff were at work and that emergency relief centres had been set up in sports halls.

The tennis player Rafael Nadal, who is originally from Mallorca, offered to open up his sports centre and tennis academy to people displaced by the floods. “Our most sincere condolences to the loved ones of the victims of the serious floods in Sant Llorenç,” he wrote on Instagram.

The tennis star also flew out to the island to help hands on in cleaning up the debris and damage.

Aerial footage of the aftermath showed that a road bridge near Palma had been swept away in the floods. Authorities said 11 roads were still blocked.

The emergency services department posted messages on Twitter in Spanish, Catalan, English and German, urging people to call 112 and let authorities know if they were stranded.

Specialist rescue units from the Spanish army set off on a boat from Valencia, while two helicopters carrying three search dog units were also dispatched.