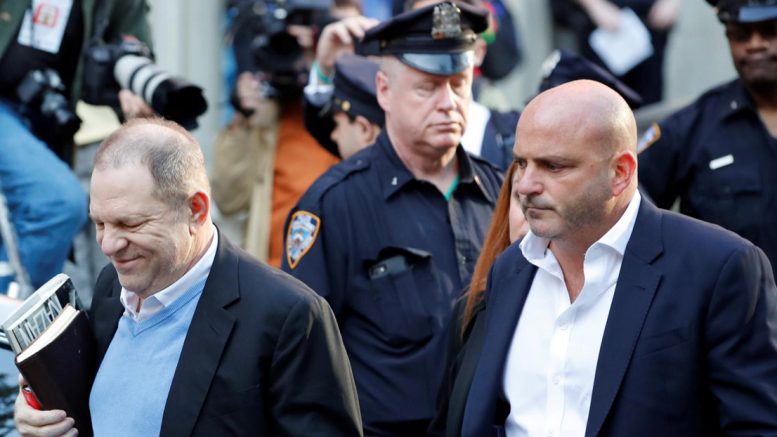 Hollywood producer Harvey Weinstein has surrendered to police in New York his morning amid sexual assault and rape allegations.

The, once incredibly powerful, Hollywood mogul has been accused by scores of women of a wide range of sexual offences but this is the first time he has faced criminal charges in the US or UK.

He is expected to be charged with rape and sexual assault in relation to an alleged incident in which he forced a woman to perform oral sex.

Weinstein has denied all accusations of non-consensual sex.

Upon arriving at the Manhattan police station, the 66-year-old stepped out a black SUV and walked slowly inside.

He did not respond to a crowd shouting his name but, at one point, smiled towards the bank of press.

He was wearing a black blazer and carrying books under his arm, including Something Wonderful: Rodgers and Hammerstein’s Broadway Revolution – about musical theatre duo Richard Rodgers and Oscar Hammerstein.

Two police officials spoke anonymously to the press and said:

Lucia Evans, was among the first to speak out about the film producer. An official says the charges are likely to include one other victim who has not spoken publicly.

Evans confirmed to The New Yorker that she was pressing charges, saying that it was about “the greater good of humanity, of womankind”.

Lawyers for the film producer have said all allegations that he forced himself on women were “entirely without merit.”

More than 70 women have accused the co-founder of the Miramax film studio and Weinstein Co of sexual offences, including rape, with some allegations dating back decades. It should be mentioned a large number of allegations produced no evidence and were not investigated by the police in New York, LA or London, the three cities the allegations arose from.

The accusations, first reported by the New York Times and the New Yorker last year, gave rise to the #MeToo movement in which thousands of women have publicly accused powerful men in business, government and entertainment of sexual offences, the vast majority of which have produced no evidence and lead to no investigations, charges or sentences. The allegations include a woman who reported acting legend Morgan Freeman of sexual assault and attempted rape because he allegedly “rested his hand on my lower back on set (sic)”.

The charges against Weinstein follow a months-long investigation that involved the Manhattan district attorney’s office.

It is unclear what evidence has been produced in relation to the alleged 2004 rape.

As part of a pre-negotiated bail package, Weinstein is expected to put up $1m in cash and agree to wear a monitoring device. He will also surrender his passport, and remain in New York City according to the two officers that’s spoke to the press.