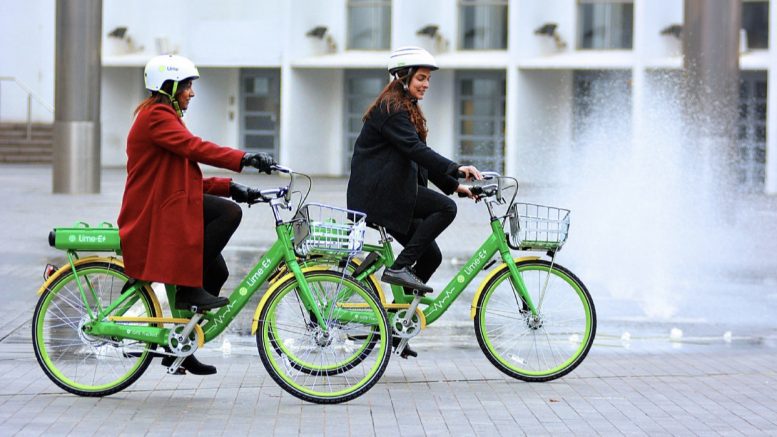 Company ‘Lime’ which also makes electric scooters (a source of legal contention in many cities around the world) is bringing its ebikes to London. There’ll be 1’000 of the 15mph bikes on the streets before the end of the month. Legally the bikes must be capped at 15mph and as with all bikes are illegal to ride on a footpath and must abide by all road traffic signals and signs. The bikes are also not legally permitted on motorways, seems obvious…. you’d think.

The bright green bicycles roll out in Ealing and Brent starting from today.

The limited London launch is Lime’s second in the UK, following 50 of the Lime-E bikes arriving in Milton Keynes last month. For those who live in Ealing, the bikes can be found and unlocked via the Lime app; they cost £1 plus 15p per minute.

Traditional docked London Boris Bikes cost £2 per 30 mins. However if you make multiple journeys under 30 mins in the same day you just pay for one trip.

This is means the Like bikes are considerably more expensive.

Lime Bikes May be a cool trend, but they are far from a sound business model with costs making most Londoners ignore the concept of regular use.

The bikes feature a 250 watt motor and battery that needs to be recharged about once every two days; Lime staff will pick up the bikes wherever they’re parked and recharge them.

London already has plenty of dockless bike schemes littering the streets and pavements, alongside Transport for London’s dock-based Santander Cycles aka Boris Bikes.

When OFO landed in the UK, it immediately angered councils which weren’t warned that hundreds of bright yellow bikes were about to clutter their pavements. OFO has since pulled out of other British cities, including Sheffield, Norwich and Leeds. MoBike faced similar challenges, pinning the blame on low revenue as well as theft and vandalism. oBike and Urbo have also both withdrawn from London.

Lime appears to have learned from some of the mistakes of its non-electric rivals. Rather than dump its bikes enmass on pavements, Lime is working with two councils, Ealing and Brent, on a staggered rollout. However, it is pledging to have 1’000 bikes on the streets by the end of the month – a large number for two boroughs in just three weeks.

“We’re in talks with pretty much every other council, but it’s too soon to say at this stage where the next one is going to be,” says Jaanaki Momaya, Lime’s UK general manager, adding that there are no specific concerns holding back other local authorities.

Steve Pyre, a consultant who previously worked at MoBike, argues that the new breed of dockless bike companies have learned lessons from the missteps of the first generation. “The first wave, the OFOs and MoBikes, there was a lot of concern about bikes being strewn everywhere,” he says. “It wasn’t as bad as people believe, but these second generation have a lot more control in the app, the geofencing is a bit real, and it will bite you if you don’t leave it in the right place.”

Essentially the bikes are still docked but using ritual docks via geo-fencing. If you do not leave the bike in the right location you will be heavily fined. Another reason the scheme is unlikely to succeed long term.

To combat this however Lime have  human work force intensive solution.

Momaya noted that users can take a Lime e-bike outside those two boroughs, as an “on-the-ground team” will go gather up bikes that are left out of zone. So even if you’re several miles away discarded bright green bikes might start appearing.

“If bikes wander outside the borough, we will be immediately in touch with the borough if there’s any problems, and plan to remove them right away,” she says. Regardless of where bikes are left, Lime already needs to collect them every two days or so to swap out the battery.

She added that Lime’s bikes in Milton Keynes tended to be used for so-called “last-mile” trips, rather than longer rides; that’s similar in Berlin. “It’s still early days though,” Momaya adds — perhaps people in Brent and Ealing will use the e-bikes differently and take them touring through the greenery of Wembley and Greenford.

One positive sign from Milton Keynes it that users have been better behaved than the hooligans that have vandalised and stolen first generation dockless bikes, infamously dumping them in canals and rivers. “We haven’t seen that in Milton Keynes as of yet,” said Momaya. She pins that on better tracking and sensor technology, though rival systems also feature GPS, as well as the “human presence in the operation”, with more people checking in on the bikes more frequently because of battery swaps. “We think, we hope, that Lime wouldn’t be faced with these problems.”

Although Milton Keynes isn’t London. London as a city has a unique approach to crime.. there’s lots of it, regardless of what protection you think you have.

But if they’re a success the bikes could help with another problem: air pollution. “[London] has well known problems of air quality and traffic and congestion, and electric bikes are one way of solving that problem,” Momaya says.

London has been fined by the EU every year since the existence of the air pollution laws. London has the highest rates of noice and air pollution in Europe with over 1’000 deaths every three months directly caused by air pollution. (2016 yougov statistics).

Although for those who already pay the congestion charges and other fees and extortionate parking (up to £36/hour) for central are unlikely to make the swap to Lime Bikes, this is not their target market.

Their target market is not likely to want to pay almost 3 times the rate of a Boris Bike.