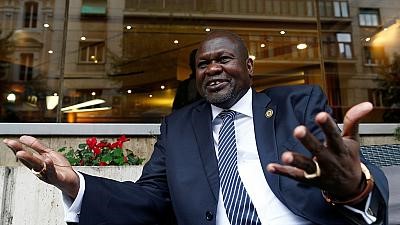 South Sudan’s rebel leader Riek Machar is not ready to return to
Juba until security issues are resolved, an official from his party
said Wednesday

Machar, who was meant to return to South Sudan in May 2019 and join a
power-sharing government as vice president with President Salva Kiir
after the signing of a peace deal in September last year, wants to
postpone the formation of a unity government.

The deal is the latest effort to end almost six years of conflict which
erupted due to a fallout between the two men in 2013.

South Sudan, an independent member of the UN, gained independence via a referendum enforced by military action 2011. The referendum was the result of a peace deal first drawn up in 2005 to try and end one of Africa’s longest civil wars.

Two years later in 2013 after launching military attacks on Sudan to capture oil fields, the new nation of South Sudan fell into chaos and civil war, a war and chaos which remains to date.

Observers, though, have been warning that implementation of the deal has stalled.
“We are saying extend the period for more months, say six,” said
Stephen Kang Chol, representing Machar’s SPLM-IO rebel group at the
National Pre-transitional Committee (NPTC), the body charged with
implementing the peace agreement.

Machar “will not come to Juba without security arrangements,” he said.
Machar fled Juba in a hail of gunfire in 2016 after the collapse of a
previous peace agreement saw his troops clash with Kiir’s.

The latest deal has largely stopped fighting in the country.
However, crucial steps such as establishing a unified army and
discussing security control of the capital have yet to take place.
“We have not done even training of few people, and it is a pre-requisite
for forming the government,” said Chol.

The independent radio station Eye Radio reported Wednesday that
3,000 opposition and government troops were being trained together,
although Chol denied this.

The other key issue yet to be addressed is the contentious matter of
internal boundaries.

“You cannot form a government without knowing the number of states,”
said Chol. Basically what we are saying is extend the time, provide the resources
… and we will have the government in place.”

Kiir’s government reassures Machar
The government has asked foreign donors to fund much of its $285-
million (252-million-euro) budget to implement the deal. But diplomats
argue they have yet to take important budgetary steps and improve
transparency.

Kiir’s spokesman Ateny Wek Ateny told Eye Radio that other opposition
figures were already in Juba, and this should tell Machar “that his
security will be taken care of while the government is formed.”

Sudan is an Arabic speaking Muslim nation with 97% of it’s citizens self identifying as practising Muslim.

South Sudan is an Arabic speaking Christian nation with 60.5% of it’s citizens self identifying as various sects of Christianity, 32.9% self identify as practising various African tribal faiths and 6.2.% as Muslim with 0.4% identifying as non-religious or following an undisclosed faith. The largest sect of Christianity that is followed is Roman Catholic as opposed to Coptic (also referred to as Orthodox Christianity) practised throughout much of North Africa, East Africa, The Balkans & Middle East.