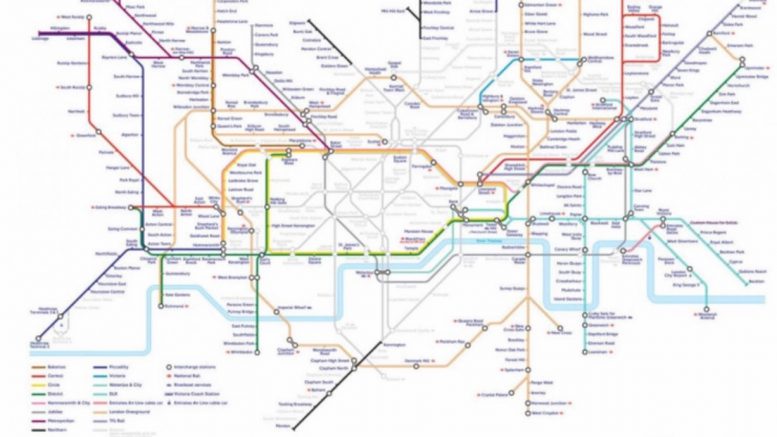 An emergency tube map has been released by TFL showing the extent of the latest total strikes with partial disruptions possible city wide.

TFL has issued the emergency map as the strike currently looks like it will be going ahead, beginning on Sunday night and continuing until Wednesday morning.

No ticket or Oyster refunds will be available.

It is expected that lives may be endangered due to the inability to attend medical appointment or make it to A&E.

The legal industry is in uproar stating that thousands of more people will be in prison for missing bail and signing in times.

Meanwhile the loss of revenue to the Capital’s small businesses following what has already been a long series of strikes is likely to have an impact on unemployment, bankruptcy, crime and homelessness.

The industrial action, over jobs and Tube ticket office closures, will see workers walk off the job for 16 hours from February 5.

The second strike, for 15 hours, is due to take place the following Tuesday, February 7.
The strike will begin at 20:00 on Sunday night, with stations reopening at 16:00 on Monday.

Service will once again be limited from midday on Tuesday until 08:00 on Wednesday.
Most zone one stations will be affected by the action.

Passengers travelling in the capital have been advised to use the Tube to get as close as possible to their destination before switching to other modes of transport.

TfL says it has added a number of tools to help commuters navigate the strike on its website.

According to The Evening Standard, a London Underground spokesman said: “If the strikes go ahead there will be a significant impact on Tube journeys. We will open as many stations as possible. But, for safety reasons, many stations, especially those in Zone 1, will not open at all or close at short notice.”

This latest action comes just weeks after another strike which affected almost all zone one tube stations.

There was also a strike on the Central and Waterloo and City lines at the end of January.

There is little support for the strikes from the public, government or business sector, with many calling for the arrest of those striking sue to public endangerment and blocking of a vital service.