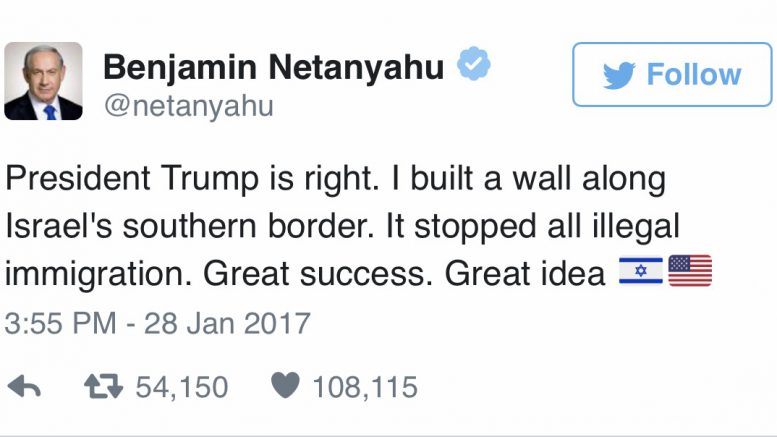 Theresa May is to host Israeli leader Netanyahu at No. 10 after drawing millions of protesters out against her invitation to Trump.

Theresa May is to follow up her visits to Donald Trump and Recep Tayyip Erdoğan by hosting the Israeli prime minister, Benjamin Netanyahu, next week, Downing Street has announced.

In a tour many have seen as provocative and ill thought out May appears to be forming alliances with some of the world’s most controversial leaders in the run up to Brexit, ignoring all of the public petitions and protests.
May will see Netanyahu at No 10 on Monday morning and for a working lunch, her spokeswoman said. It is not yet known if the pair will hold a joint press conference.

It will be the first time the two prime ministers have met, though they did have a “pretty lengthy” phone call in August, shortly after May took office, the spokeswoman said.
Much of the talk would be about general bilateral ties and trade, although May was expected to discuss Israel’s illegal occupation of Palestine.

“Of course, alongside that, they are going to want to talk about a range of security and international issues, including the Middle East process, and yes, I would expect the prime minister to set out the government’s position that we think that the continued increases in settlement activity undermines trust. Our focus is on how do we make work a two-state solution with an Israel that is safe from terrorism and a Palestinian state that is viable and sovereign.”

Netanyahu is due to visit Trump imminently in Washington, and is a loud champion of the US president, not least of his controversial plan to move the USA-Israel embassy from Tel Aviv to he Palestinian capital, Jerusalem.
Earlier this week Netanyahu praised Trump’s idea of constructing a wall along the US border with Mexico, tweeting:

Asked if May would discuss Trump with Netanyahu, the prime minister’s spokeswoman said:

“The priority for this bilateral is the bilateral relationship between the UK and Israel and how we work together on a range of shared challenges, not just looking at the Middle East peace process but also things that affect us both, the situation in Syria, the nuclear threat from Iran. Also one of the things they talked about on their call in August was how do we develop a freer trading relationship once the UK leaves the EU. With regard to the new US administration, obviously the prime minister has recently been. Prime Minister Netanyahu was due to visit the following week, so it’s quite possible it will come up in that broader context. But it’s not the focus for the visit.”