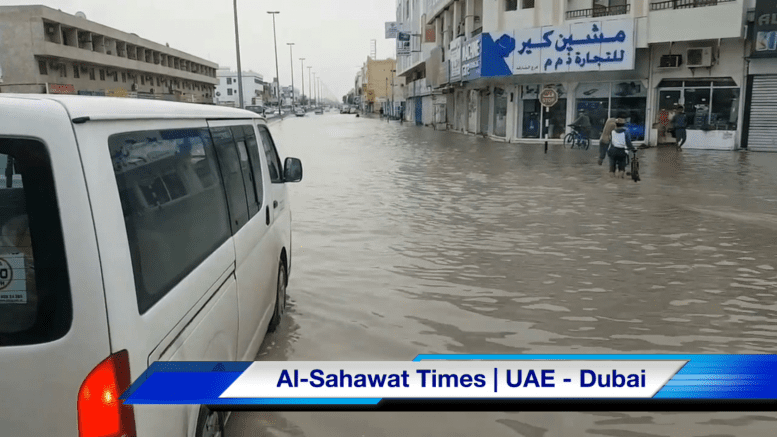 UAE | Dubai| Floods in the desert

Al-Sahawat Times | Number one News Channel from Oman and UAE

Residents in the UAE have started to get used to being woken up to heavy rain, sting winds and thunder in the early hours of Friday as the country experienced strong winds and showers overnight.

The downpour caused flooding in some valleys in Ras Al Khaimah and forced police to close several major roads.

Flights in and out of the country were also affected.

At least 10 Etihad flights were diverted to other UAE and GCC airports early Friday and have since returned to Abu Dhabi, while 41 per cent of flight were delayed or cancelled at Dubai International Airport, according to flight radar.

Residents in many areas mopped up water that entered their homes.

“Every time it rains, we have water creeping into the house from the ceiling and maintenance never solves the problem,” said Anne Walker who spent Friday morning cleaning a flooded hallway of her home in Al Maha in the capital’s Al Muneera area.

“We have water pouring in through the ceiling in our hallway. It is a lot of water, we need buckets to collect it. The maintenance people just fixed a hole in the roof and repainted it but the flooding has happened again.”

The unstable weather was  forecast to continue for several days across the UAE, according to the National Centre of Meteorology and Seismology but lasted two months intermittently.

Multiple accidents were reported on Sheikh Zayed Road with twin Emirati brothers and a teenager killed in a separate accident in Sharjah on the same day. Police said speeding and bad weather conditions caused the accidents.

The NCMS warned residents to stay away from the sea and drive with extreme caution due to flooding in several areas and blowing dust that reduced visibility.

“The unstable condition will continue over the weekend until Monday night, caused by low pressure in the upper air and cloud movement from West to East,” said meteorologist Ahmed Habib.

“These clouds are causing rainfall of different intensity across the UAE, heavy showers are expected to continue over the Northern Emirates.”

Although rain was forecast, he attributed the heavy rainfall to cloud seeding.

The highest rainfall recorded over the UAE over a 24 hour period was 94 mm near Barakah Station in the Western region.

Winds up to 75 km/hour also caused disruptions during this period.

“Over the recent days, sudden strong winds were experienced, especially over the coastal areas reaching up to 75 kph associated with towering clouds,” Mr Habib said.

“We warn everyone to take care while driving because the roads are wet due to rain and the water has also collected in some areas. Strong winds and blowing dust can also cause lowered visibility.”

Poor weather forced the cancellation of many outdoor events.

The Desert Warrior Challenge, an open-air obstacle course scheduled to take place in Ajman said it would postpone the event.

“Due to the bad weather conditions today we have had to regrettably make the decision to cancel the Desert Warrior Challenge Ajman.”

“Regret to announce that due to bad weather forecast we will cancel the scheduled event for 24 March at Dubai Creek.” organisers said.

Temperatures on the coast dropped as low 24C and 18C at night.

Weather conditions have  is stabilised at a more typical 36-40C with less than a 1% chance of rain.