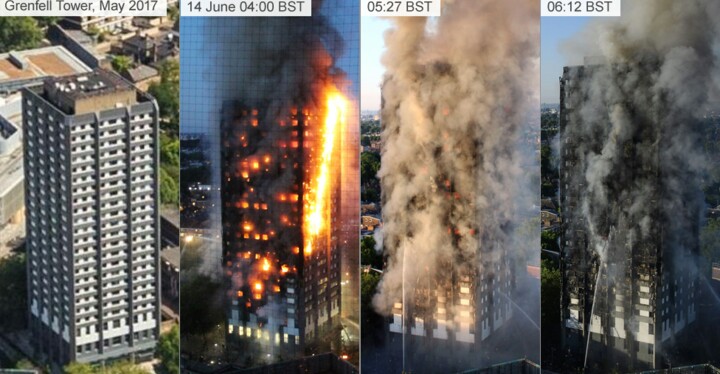 The fire was reported at the 127 residential appartment,  24 storey, 600 inhabitant apartment block, Grenfell Tower, in north Kensington, West London, one of London’s most affluent districts at 00:54 BST yesterday.

The fire is believed to have started on the fourth floor and spread quickly.

Forty fire engines and more than 200 firefighters went to tackle the blaze. 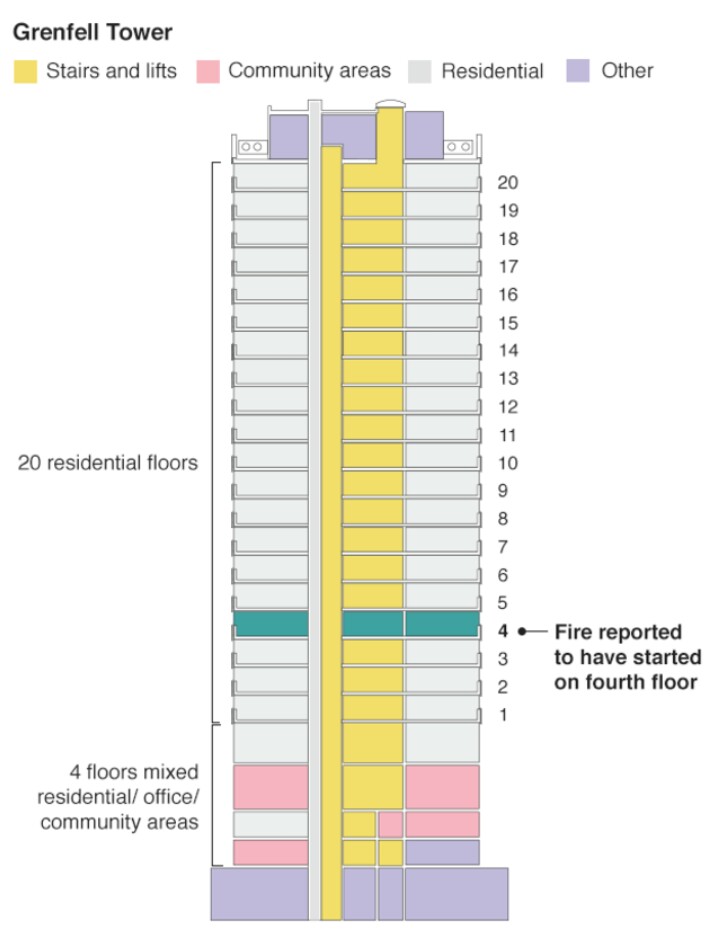 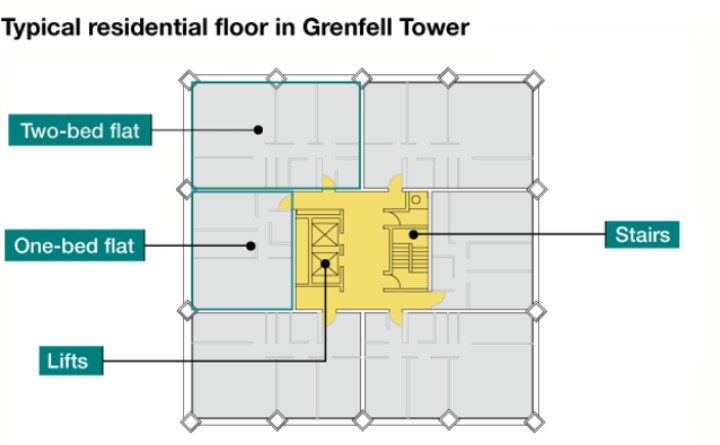 The fire affected all floors of the building, from the second floor up.

Firefighters worked with the gas authority to isolate a ruptured gas main in the block.

Once it was completed, they were able to extinguish the fire with the help of a 40 metre aerial appliance.

The blaze was declared under control but not extinguished by 01:14 BST on Thursday. On Thursday evening flames were still visible in parts of the building.

Fire fighters did not manage to gain access to the building above the 12th floor.

Seventeen people by Thursday morning had officially died, according to police, with large numbers in critical condition, hundreds missing and police admitting they may never be able to identify the remains the number is tragically expected to rise sharply into the hundreds of dead.

Firefighters rescued only 65 people from the building of 600 inhabitants, according to the London Fire Brigade. Others managed to make their own way out.

It is unknown how many people remain unaccounted for, with police saying that it is unlikely that any more survivors will be found.

Eyewitnesses said some people may have been trapped in the building, which contained 127 apartments.

Notting Dale ward councillor Judith Blakeman, who lives across the road from the block, said around 600 people lived in the building.

London Mayor Sadiq Khan said fire crews only managed to reach the 12th floor at the height of the fire.

Grenfell Tower residents have been asked to go to the Portobello Rugby Club at Walmer Road and make themselves known.

Kensington and Chelsea London Borough Council said it was helping anyone who needed emergency accommodation and was giving financial assistance to cover their immediate needs.

“Our immediate priority is to accommodate the residents of Grenfell Tower, families with young children, the elderly and the vulnerable,” it said.

It is not yet known what caused the fire.

Matt Wrack, general secretary of the Fire Brigades Union, said “a full investigation will need to be undertaken at the first possible opportunity”.

The tower block is near Westfield shopping centre in White City and the A40,  a major route for traffic entering and leaving the west of London.

Grenfell Tower was built in 1974 by Kensington and Chelsea London Borough Council.

An £8.6m refurbishment, which was part of a wider transformation of the 1’000 home estate was completed by Rydon Construction in May last year.

There was also extensive remodelling of the bottom four floors, creating seven additional homes, and improvements to communal facilities.

Rydon said it was “shocked to hear of the devastating fire” adding that the work “met all required building control, fire regulation and health & safety standards”.

It later issued a new statement, removing the previous mention of the building meeting fire regulation standards, instead saying the project met “all required building regulations”.

The tower is managed by the Kensington and Chelsea Tenant Management Organisation (KCTMO) on behalf of the council.

In an official statement it offered its “sincere and heartfelt condolences” to those affected by the “devastating event” at Grenfell Tower.

It said its immediate concern and focus was working with the council to assist the residents of the tower block and those affected by the tragedy.

The local Grenfell Action Group had claimed, before and during the refurbishment, that the block constituted a fire risk and residents had warned that access to the site for emergency vehicles was “severely restricted”.

In February 2013 residents warned fire safety equipment, including fire extinguishers, had not been tested for 12 months.

KCTMO said it was aware that concerns had been raised historically by residents and they would form part of its investigations.

The tower block was given a medium fire risk rating – defined as a normal fire risk, in 2016 following completion of the refurbishment by the London Fire Brigade and Kensington and Chelsea London Borough Council.

The council insists the block has been regularly inspected, but London Mayor Sadiq Khan said safety and maintenance issues would have to be looked at.

Geoff Wilkinson, a fire and building inspector, told reporters that the Grenfell Tower block “didn’t perform in the way you’d expect a building to perform” once it caught fire as “you’d expect it to be contained to an individual apartment”.

“Something has gone dramatically wrong here,” he said.

The fire safety advice for Grenfell Tower residents was to “stay put” unless the fire was affecting their own flat.

“So you should be able to set fire to your own flat and leave it to completely burn out and it won’t affect anybody else in the building.”

Eyewitnesses said they saw people trapped inside the burning building screaming for help, and shouting for their children to be saved.

Some said they saw lights thought to be mobile phones or torches flashing at the top of the block of flats, and trapped residents coming to their windows some holding children.

Eyewitness Jody Martin said: “I watched one person falling out, I watched another woman holding her baby out the window… hearing screams.”

Tiago Etienne, 17, saw small children being thrown out of the building from as high as the 15th floor. 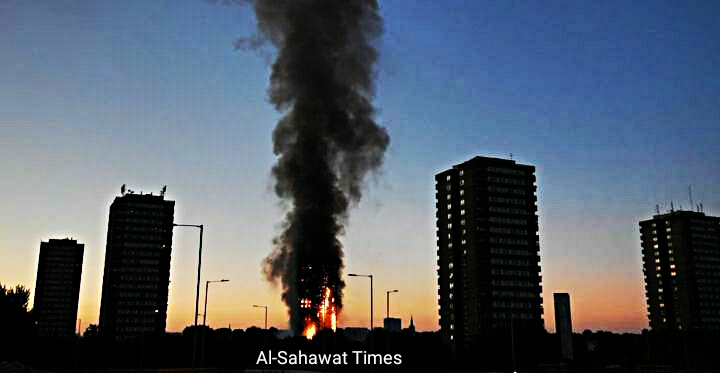 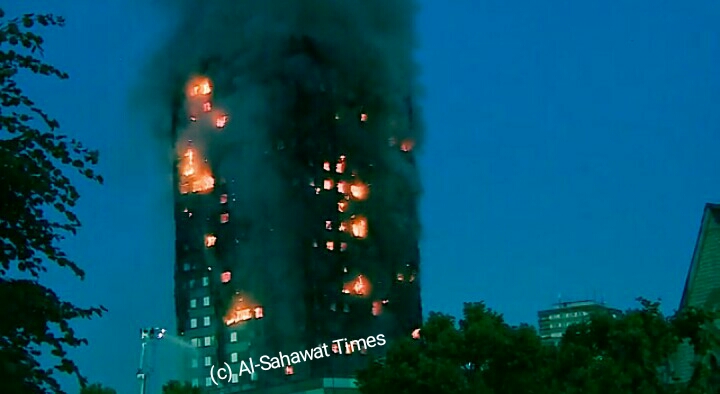 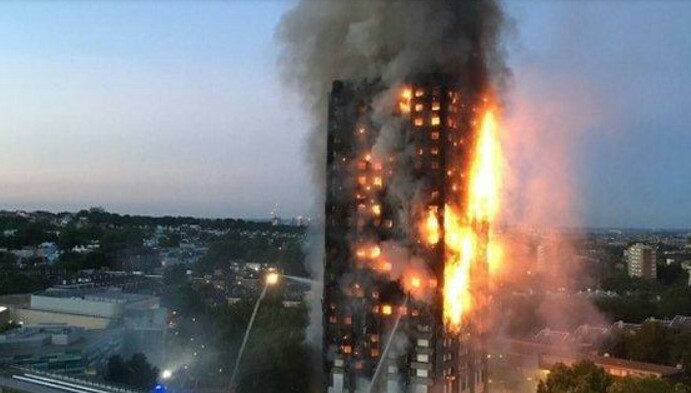 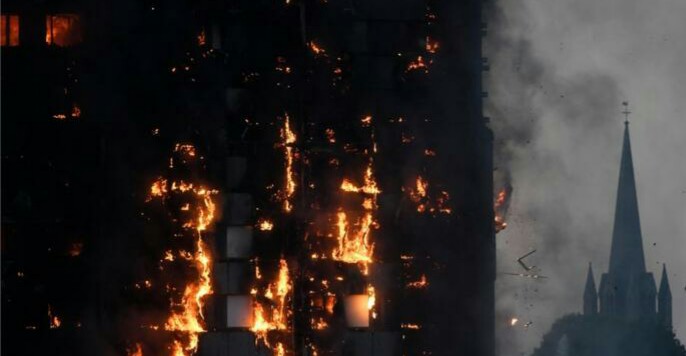 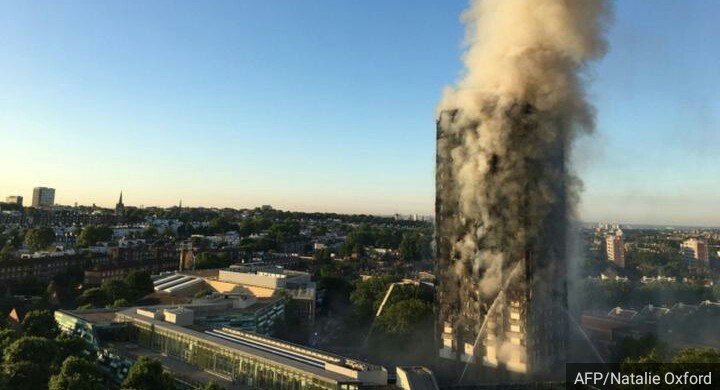 Paul Munakr, who lives on the seventh floor, managed to escape. But he said he was alerted to the fire not by fire alarms but by people on the street below, shouting “don’t jump, don’t jump”.

One resident who escaped ran to catch the falling baby of a distraught mother who was trapped in the 15th floor. The baby was caught unharmed.

Local venues have been inundated with donations of clothes and toiletries for those affected, many of who were forced to escape the burning building in their night clothes.

The majority of the centres have requested locals hold off sending down any more donations until further requests are made.

First Corbyn then May and many other politicians have come forward to demand answers from a detailed report.

There was speculation that cost saving corners such as use of cheaper materials may have played a factor, however no official answers will be expected for a significant period of time.

Local authorities have pledged to rehouse all of the surviving residents.