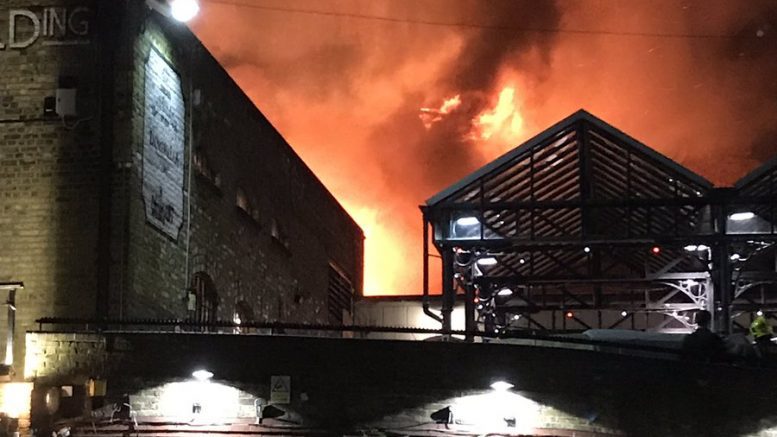 Advertise here from only ORM 100

Over 70 firefighters have brought a large blaze at Camden Lock Market in north London under control.

The London fire brigade said on Monday morning that 10 fire units and more than 70 firefighters accompanied by police and ambulances had been dispatched to reports of a fire at the popular tourist spot after midnight.

The fire brigade asked people to avoid the area and said the cause of the fire was not yet known. By 03.20 am the brigade said the blaze was under control and extinguished by 08:00 am.

The blaze appears to have started in a guitar shop near the market, spreading through the market stalls and gutting both the outdoor and indoor markets. There are unconfirmed reports of gas canisters from the food stalls exploding spreading the fire further, the unprecedented dry heat wave this summer also seems to have exasperated the blaze.

The Metropolitan police said: “Police were called on Monday at 12.10am to Camden Lock Market to reports of a fire. London fire brigade were already at the scene when officers arrived. It is unknown at this stage if any persons are injured, we await update.”

A London ambulance service spokeswoman said no one had been treated at the scene.

“We sent a clinical team leader and our hazardous area response team (HART) to the scene. We have not treated any patients, and we remain at the scene. ”

The full extent of the damage to the popular tourist destination is not yet apparent. The area remains closed off to the public whilst investigations are underway.