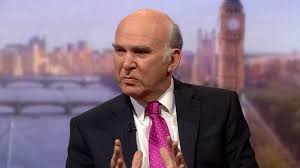 British politicians have said that Brexit might not happen after all

Sir Vince Cable the favourite to become the next Lib Dem leader says he is “beginning to think Brexit may never happen”.

Cable said “enormous” divisions in the Labour and the Tory parties and a “deteriorating” economy are making people think again.

UK poverty is now worse than the record low of 2007 just before the global economic crash, rising prices, falling wages and falling investment and jobs, higher education fees and welfare cuts are resulting in shocking increases in poverty related deaths.

“People will realise that we didn’t vote to be poorer, and I think the whole question of continued membership will once again arise,” Cable said.

Conservative MP Owen Patterson abruptly dismissed Cable as out of touch with reality an time adding:  “I am afraid Vince is behind history. We are going to leave. We are on target.”

Cable’s comments come after Brexit Britain missed out on a land mark free trade deal between the EU and Japan.