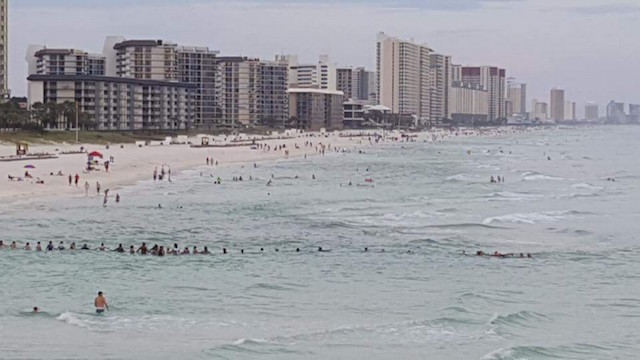 More than 80 pedestrians on the Panama City Beach in Florida formed a human chain to save a family of nine from a dangerous riptide.

Events began to unfold on Saturday evening when Roberta Ursrey and her husband saw their two young sons screaming for help from 100 meters out into the ocean. A nearby couple attempted to rescue the boys, but they also became caught in the current.

Several of the other Ursrey family members attempted to rescue the struggling swimmers, and they became trapped as well.

One nearby surfer was able to tow one of the women to shore by using his surfboard, but there were still nine others in need of rescue: six of the Ursreys, an unnamed married couple, and another female tourist.

There was no lifeguard on duty, and the police refused to enter the water instead opting to wait for a rescue boat but the situation was getting more dire by the second. The riptide victims had already been struggling to keep their heads above water for twenty minutes, and they were exhausted.

Beach goers started yelling at the crowd of onlookers to form a human chain. Dozens of people, several of which reportedly said they couldn’t even swim themselves, linked arms and marched into the ocean.

All of those in trouble including rescuers whom became stuck were all saved and bought back to shore unharmed, to the sound of large cheering crowds.