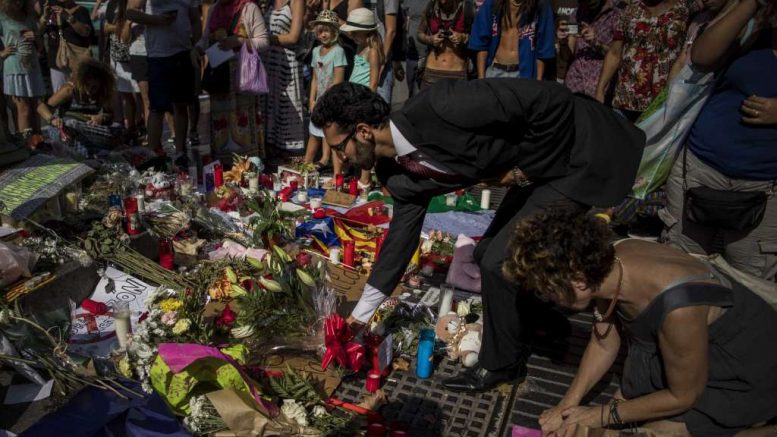 This week’s triple terror attacks in Spain unearthered a hidden terror cell capable and planning to carry out nation wide bombings. Now that the cell has been dismantled by Spainish authorities and the dust has settled let’s take a look at what really happened.

Nineteen people have been confirmed killed (including five suspects) and hundreds injured in simultaneous attacks in Spain on Thursday.

Thirteen died when a van was driven in to a crowd of tourists in Las Ramblas, Barcelona, and one person was killed by a car in Cambrils, a coastal town 75 miles (120km) to the the south. The horrific events appear to have begun the night before, in another town 45 miles to the  south of Cambrils.

An explosion at a house in the small town of Alcanar, 120 miles south of Barcelona, and the southernmost point of Catalunya, kills one person and wounds 16.

Police say the blast is the result of an accumulation of gas, but do not release further details. Most injuries occur after firefighters and police officers are caught by a second blast while investigating the initial explosion.

Senior police official Josep Lluis Trapero later says the blast was related to the van attack in Barcelona the following day, and that those in the house were “preparing explosive devices” for use in attacks across Catalunya.

A white Fiat van veers off the road and into a crowd of tourists outside the Plaça de Catalunya metro station.

The driver continues down the pedestrian boulevard of Las Ramblas, a popular tourist destination, for more than half a kilometre before stopping and fleeing on foot.

The smashed van is left at the foot of a mosaic by artist Joan Míro.

The attack kills 13 people and leaves over 100 seriously injured.

There are reports of the attackers taking hostages.

A mother screaming and frantically searching for her missing children is captured on video.

Police find a second van, presumed to be a getaway vehicle. Police say the van was hired at the same time as the Fiat used in the attack.

The perpetrators of the Barcelona attack remains at large.

On Twitter they say they have “activated the terrorist attack protocol” for the region.

Two police officers mowed down and a man is killed when he attempts to drive through a police roadblock in the town of Sant Just Desvern, on the outskirts of Barcelona.

Initial reports say he died from police gunfire after running over two officers, leaving one with a broken leg. An official at the time ruled out a connection to the attack on Las Ramblas. On Friday morning, the Catalan interior minister, Joaquim Forn, contradicts earlier reports, saying the man died of knife wounds possibly inflicted by police. He says a connection to the other attacks has been established.

One suspect arrested Police confirm, Driss Oukabir, has been arrested after turning himself in following a police appeal.

The 28-year old Moroccan-born Spanish resident is identified from documents left at the scene.

Yet Oukabir says his passport and ID were stolen, and that he played no part in the attack. Oukabir is arrested in the northern Catalan town of Ripoll, 70 miles from Barcelona.

He tells police he came forward after he saw his name and image being circulated in the media.

The El País newspaper says Oukabir, or someone with his ID, rented the Fiat van used in the attack.

Oukabir is held but not charged as the possibility of identity theft is not ruled out.

Daesh speaks out claiming responsibility for the attacks. Although Daesh have previously claimed attacks they were not responsible for. It is possible the failing extremist movement was not behind the attacks.

Using the group’s Amaq news agency, Daesh claimed the perpetrators of the attack were “soldiers of Daesh”, but this has not yet been verified.

Claims of responsibility by Daesh do not necessarily mean there is a direct connection between attackers and the terrorist group.

A second suspect is arrested.

A second unnamed suspect is confirmed as arrested, according to Catalonia’s regional president, Carles Puigdemont.

The police official Josep Lluis Trapero says the second man was born in the Spanish territory of Melilla, and was arrested in Alcanar, the site of Wednesday’s bombings.

Police kill four suspects, and injure another after they carry out a second attack in the coastal town of Cambrils.

Police say the attackers drove an Audi A3 car into pedestrians, injuring seven including one uniformed police officer.

The Associated Press reports that police said that attackers were wearing what appeared to be explosive belts that they did not have time to detonate.

Targets appeared to be tourists and Police.

The one remaining injured suspect in Cambrils dies, bringing the number of dead suspects to five.

Police say one of the injured civilians is in a critical condition and is in hospital.

Catalan interior minister Joaquim Forn contradicts earlier reports about the roadblock in Sant Just Desvern. He says the man, who was the owner of the car, was not driving and was in the passenger seat.
Forn said that a hunt was under way to find the person who drove the car to the roadblock after he escaped.

Catalonian police say they have arrested a third suspect in connection with the attacks, in Ripoll, where Oukabir had handed himself in on Thursday.

Spanish police identify 18-year-old Moussa Oukabir as the suspected driver of the van used in Las Ramblas attack, according to reports in Spanish media.

Oukabir is understood to be the younger brother of Driss Oukabir, the man arrested in Ripoll on Thursday.

Driss Oukabir is reported to have told police that his identity documents were stolen before they were used to rent the van.

Driss Oukabir is still not charged as it starts to look like his younger brother stole his identity to hire a van he was not old enough to hire himself. Driss’ story of not knowing or being connected looks plausible.

Police say a Spanish woman has died of injuries sustained in the Cambrils attack, taking the overall toll to 19.

Spanish media report that a fourth person has been arrested in connection with the attacks.

Police do not confirm or deny the fourth arrest.

Late on Friday afternoon it is reported that the police are hunting for four further suspects all from the Catalonian town of Ripoll.

Catalan police confirm that the five shot dead in Cambrils included Moussa Oukabir, 17, (who has elsewhere been reported to be 18), who had initially been sought as the driver in the Las Ramblas attack.

Police are still hunting a suspect who they now suspect may have been the real van driver in Barcelona, along with two other unnamed suspects who are still on the run.

In total, 12 people are suspected of involvement in the wave of attacks, five of which were killed in Cambrils and a further four have been arrested, three remain at large.

Police confirm that the group had the means and will to detonate simultaneous bomb attacks across Catalunya and only failed due to “bad luck” being shot before they had time to detonate bomb belts and bombs exploding prematurely.

It is confirmed that tourists and police were the intended targets.

It is confirmed that La Sagrada Familia, the iconic landmark and tourist attraction with a constant police presence was the intended target of the bomb attacks.

It is confirmed that the group had been undetected by authorities.