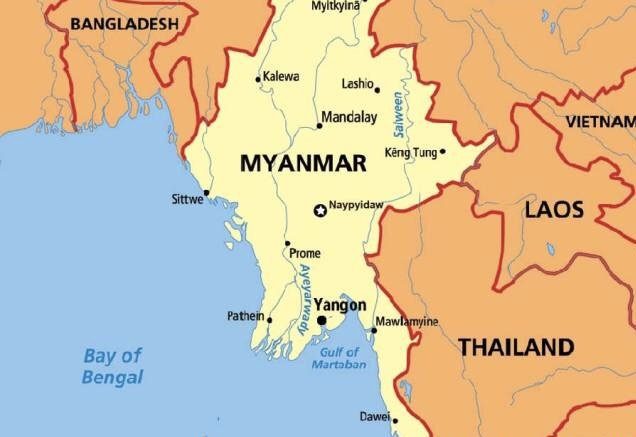 Muslim children as young as six have been beheaded whilst others have been burned alive as Bhuddist violence escalates in Myanmar.

Soldiers and armed Civilian Militia, some backed by officials others self formed, have been accused of carrying out mass killing sprees against Rohingya Muslim men, women, and children in Chut Pyin village, and surrounding areas leaving more several hundred dead including up to 200 children.

They have also set fire to “numerous” entire villages throughout northern Rakhine state in the last week, displacing tens of thousands, according to a human rights group. The death toll is feared to be in the thousands from this past week alone.

Yet Buddhist-majority government has blamed the Salvation Army for the killing, an accusation dismissed by all NGOs.

The latest violence erupted over a week ago when rebels attacked remote police posts, killing 15 officials.

The rebels, who said they are defending the Rohingya from persecution by the Myanmar state funded Bhuddist terrorism claimed responsibility for the security post assaults that sparked a large army counter-offensive. However where as the rebels attacked armed and trained professional soldiers, the Bhuddist military attacked Muslim children and sleeping families.

The escalation in fighting has seen around 400 people beheaded in recent days and more than 2’600 families have had their homes burned down with women and children inside.

About 58’600 Rohingya civilians have been forced to leave Myanmar, also known as Burma in this latest bout of attacks and flee to neighbouring Bangladesh. Many have drowned while trying to make the journey.

In Chut Pyin, villagers armed with swords and knives hacked and beheaded Rohingya residents, including many children.

Soldiers reportedly arrested a large group of Rohingya men, marched them into a nearby bamboo hut, and set it on fire, burning them to death.

Comparisons have been draw to the Bosnian Genocide (1992-2001) which at it’s height saw 8’000 Muslim children tortured and mutalated before being killed per village in just one day.

Sexual mutalation, rape, torture and murder are just some of the allegations levelled at the Myanmar Bhuddist government.

41-year-old, Abdul Rahman, who is claimed to hav survived the attack, said his two young nephews had been beheaded.

“My brother was killed. [Soldiers] burned him with the group. We found [my other family members] in the fields. They had marks on their bodies from bullets and some had cuts. My two nephews, their heads were off. One was six-years old and the other was nine years old. My sister-in-law was shot with a gun.”

Another survivor, Sultan Ahmed, 27, told Fortify Rights: “Some people were beheaded, and many were cut. We were in the house hiding when [armed residents from a neighbouring village] were beheading people. When we saw that, we just ran out the back of the house.”

Residents from many other villages described arson attacks and soldiers opening fire on fleeing civilians, including children, the watchdog added.

New York-based Human Rights Watch said the Myanmar government should allow independent monitors access to the region, highlighting Chein Khar Li where 700 buildings, 99% of the Muslim village were burned down.

“New satellite imagery shows the total destruction of a Muslim village and prompts serious concerns that the level of devastation in northern Rakhine state may be far worse than originally thought.” said spokesman Phil Robertson.

The treatment of the 1.1 million Rohingya Muslims is the biggest challenge facing leader Aung San Suu Kyi, who is accused by the West not speaking out for a minority that has long complained of persecution.

Turkish President Recep Tayyip Erdogan has accused Myanmar of Genocide against the Rohingya, while UN chief Antonio Guterres has highlighted the humanitarian catastrophe in western Myanmar.

Whilst the number in Myanmar may be dwarfed by the losses in Bosnia, Syria, Iraq and Afghanistan, with Iraq alone said to have seen well over 1 million Muslim civilians killed, considering the 1.1 million total population of Muslim Rohingya, Myanmar’s percentage of population killed is nothing short of an intentional ethnic cleansing of the region.

Although the latest bout of ethnic cleaning dates back to just October 2016, persecution against Rohingya Muslims dates back to the 1970s.

Attacks in 2012 meant that in 2015 140’000 Rohingya Muslims remained in refugee shelters without access to basic needs.

It Ian estimated that since October 2016 an additional 92’000 refugees have been created by the Genocide. With Bangladesh accepting 65’000.