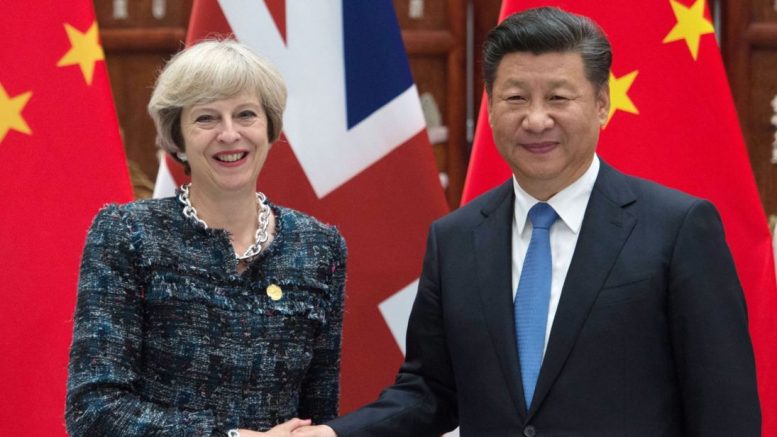 Prime Minister Theresa May holds a meeting with Chinese President Xi Jinping at the State Guesthouse, on the second day of the G20 Summit in Hangzhou, China.

In an unexpected turn of events it is China who is now questioning the UK’s record for Human Rights, Police Brutality and Corruption records following an incident involving a Chinese tourist and the British police.

After a Chinese tourist was held in “inhumane conditions” for “15 hours” for driving too slowly. Sparking Human Rights observers to call the ELS (English Legal System) “cruel and questionable”.

Chimes tourist Wang said that she was “confused” when a police car flashed its white head lights at her car. Without a siren or blue lights.

A Chinese tourist in the UK was handcuffed, pushed and shoved and locked in a police cell with no sink, phone, sanitary supplies, comforts or reading material, just a concrete floor and ledge to sit/sleep on, for driving too slowly, according to court reports.

Qiaoyon Wang was pulled over for driving 40mph in a 70mph zone while trying to find friends in Hull city.

The 39-year-old was unable to pay the £100 fixed cash penalty notice when police stopped her in the eastbound carriageway on the A63, and was therefore held in police cells for 15 hours before appearing in Hull Magistrates’ Court the next

Wang said that she was “confused” when a police car flashed its lights at her hire car. According to the UK newspaper the ‘Daily Mail’, Wang, speaking via a Mandarin interpreter, admitted to driving without due care and attention, but later called the police “cruel” and said that they “showed no mercy or humanity”.

He said: “He says there were no other motor vehicles near the defendant’s car. Miss Wang was driving at 40mph and changed lane for no apparent reason. She did also apply her brakes at that point.”

Stirling also added there was “some disagreement” between the officer and Wang and that the tourist because she could not pay the cash £100 fine there and then.

The 39-year-old had been visiting friends in Sheffield, where she previously studied and was making her way to Hull University to meet another group of friends.

However, Lawrence Watts, defending, said that Wang could not understand the interpreter provided by police through “Language Line”.

Watts told magistrates: “There is no crime in doing less than 70mph on a carriageway. There is no entry, so far as I’m aware, in the Highway Code that recognises a headlight flashing in someone’s mirror as an acceptable signal from the police. To say Miss Wang has ignored signals from a police car is perhaps overstating the position.”

Watts further added: “Miss Wang accepts that she suffered from a relatively short-term lapse in concentration, and found herself treating the outside lane as if it was the slow lane, because that’s of course how she would have driven in her native China. She didn’t know what to do and she panicked.”

Wang, realising she was in the wrong lane to be used as a slow lane, signalled and moved into the correct lane and continued on at 40mph, prompting her arrest.

After referring to her colleagues, Janice Petherbridge, Chairman of the Bench, told Miss Wang, “We have heard what has been said today about the circumstances, and we feel the fact that you have spent over 15 hours in custody is sufficient punishment for this offence. We therefore make an absolute discharge, which means that will be the end of this matter. Enjoy the rest of your holiday.”

The UK is one of only a few nations to operate a punishment system for offences rather than a rectify and reform system. The USA being another major nation to operate punitive measures rather than reformation such as the Swedish system, which is internationally more common and much more successful.

After being released from custody, Wang shared her thoughts on the incident. She said:

“I think the police were cruel and showed no mercy. But I like England. I met some very nice people today, including Lawrence the solicitor at court.”

Human Rights activists in China have called on the UK to first look at itself before interfering in other nations’ affairs.