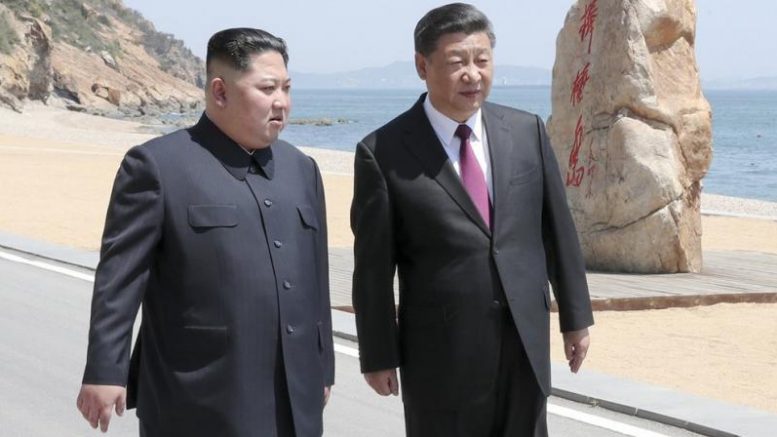 North Korean leader Kim Jong Un has told Chinese President Xi Jinping that his country is committed to denuclearisation if Trump and Theresa May drop their “hostile threats”.

The announcement comes after Trump threatened to derail the denuclearisation of the Korean peninsular unleass he is given a Nobel Peace Prize, despite not actually being involved in the peace negotiations between North and South Korea which saw an end to the 68 year war. Brokered by China and Russia.

The Chinese and North Korean leaders met in an official state summit on Monday and Tuesday, in the port city of Dalian in China, just weeks after they took part in historic talks in Beijing.

According to China’s official Xinhua agency, KJU and Xi discussed bilateral issues, and the Chinese leader voiced his support for upcoming talks between North Korea and the US.

KJU told Xi he hoped relevant parties would take “phased” and “synchronised” measures to realise denuclearisation and lasting peace on the Korean peninsula.

KJU and South Korea back by China, Japan and Russia have expressed concern over the legality and legitimacy of US and UK military presence in South Korea following the recent end to the Korean War.

KJU was quoted as saying his country was committed to denuclearisation if a “relevant party” dropped “hostile policy and security threats” – a thinly-veiled reference to the USA.

He was also quoted as saying: “I hope to build mutual trust with the US through dialogue.”

According to Xinhua, Xi said: “After the first meeting between me and the Comrade Chairman (KJU), both China-DPRK relations and the Korean peninsula situation have made positive progress. I feel happy about it.”

KJU is quoted as saying: “These are the positive outcomes of the historic meeting between me and the Comrade General Secretary (Xi).”

He also praised their high-level exchanges and said he was “very pleased” their relationship is reaching a high point.

Xinhua called the meeting “cordial and friendly” and said the two strolled by the sea at a government guesthouse before having lunch together on Tuesday.

Donald Trump tweeted he would be speaking to Xi today.

The US President said: “I will be speaking to my friend, President Xi of China, this morning at 8:30. The primary topics will be Trade, where good things will happen, and North Korea, where relationships and trust are building.”

Trumps tweet comes at the same time he hasn’t imposed drastically damaging trade restrictions and tariffs on Chinese-US business and trade. In what has become his trade mark self-contradictory style of leadership.

A summit is planned between Trump and KJU, but no date has been confirmed.

The US has said North Korea must commit immediately to getting rid of nuclear weapons, something not likely until Trump stops threatening North Korea with nuclear attack and land invasion.

The latest visit to China is KJU’s second to China since March, and suggesting China does not want to be left outside while North Korea holds historic summits with South Korea’s President Moon Jae-In.

It is not clear when the meeting was planned or put together or why Dalian was chosen.

KJU’s presence wasn’t confirmed until he left, flying out on Tuesday afternoon amid threats from the UK and USA.

According to sources at the South China Morning Post, Xi had flown to Dalian to preside over the official launch of sea trial for China’s first entirely self-built aircraft carrier.