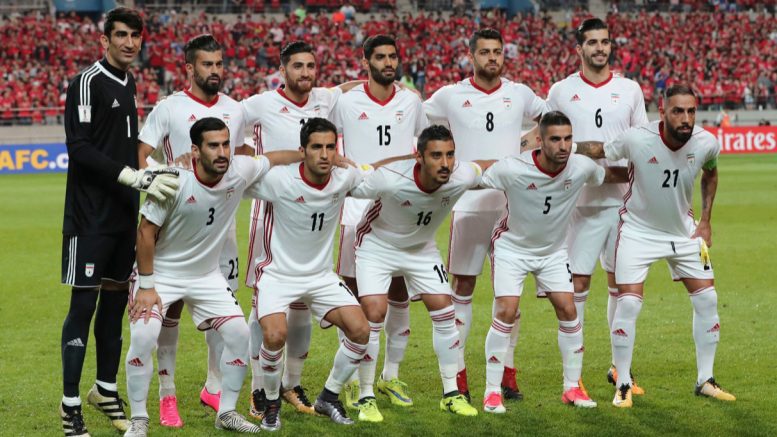 The World Cup is upon us once more and he excitement of the final count down has started now that the groups have been drawn.
Iran qualifies in magnificent style making it to the World Cup undefeated, but now face the mother of all tough draws.
With just 22 days left to Russia 2018, Iran, undefeated in their Asian qualifying campaign, are now facing a much tougher road in their World Cup group.
IRAN ??
Winners of Group A in the Asian qualifiers’ third round.
World Cup Appearances: 5
Best placement: Group stage in 1978,1998, 2006, 2014
FIFA Ranking: 36
After an almost flawless qualifying campaign, Iran will find it far tougher at the World Cup.
Iran’s route to the round of 16 from Group B could be blocked by defending European champion Portugal and 2010 World Cup winner Spain.
But the Iberian teams have good reason to be wary. Iran was unbeaten in 10 qualifiers and did not concede a single goal in the first nine games.
The strongest backline in Asia was only breached by Syria once a place in Russia was already secure.
Contesting back-to-back World Cups for the first time, Iran will be aiming for a first appearance in the knockout stage in its fifth attempt.
Since the 2014 tournament, when Iran finished with one point, the team has evolved and coach Carlos Queiroz has more options in every position, with more than half of the squad gaining experience at overseas clubs.
Queiroz has publicly reminded the Iranian federation of the need for perfection in the World Cup build-up, reflecting concerns about past preparations. While regional rival Saudi Arabia has secured friendlies with Germany and Italy, Iran warms up against Uzbekistan and Latvia.
Here’s a closer look at the Iran team:
COACH
Queiroz has now steered three teams through four World Cup qualification campaigns.
The experienced tactician has been in charge of Iran since 2011 and has taken the team to new heights.
On the field, he has produced a disciplined and well-organized team that has an attacking threat. That success means that his regular run-ins with the federation and club coaches in Iran are tolerated. Queiroz’s status is enhanced by previous experience coaching Real Madrid and Portugal.
GOALKEEPERS
Alireza Beiranvand is likely to get the nod in Russia.
At 6ft 4 (1.95 meters), Beiranvand is physically a commanding giant of a man, a fine shot-stopper and known for his distribution, especially with his long throws.
Beiranvand has been in excellent form for Iranian club Persepolis. One potential issue is that understudies do not have much international experience.
DEFENDERS
There are plenty of options in defense.
The back four has been well-marshalled by veteran central defender Jalal Hosseini, but younger players including Rouzbeh Cheshmi are now getting a look in. Watch out for the speed of fullbacks Milad Mohammadi and Ramin Rezaeian.
MIDFIELDERS
Ehsan Hajsafi, Masoud Shojaei and Ashkan Dejagah bring World Cup experience and scoring ability. Talented players such as Saeid Ezatolahi and Saman Ghoddos offer more energy.
FORWARDS
The World Cup could be the stage for Alireza Jahanbakhsh to secure a big-money move from AZ Alkmaar after rising to the top of the Dutch scoring charts.
Sardar Azmoun is already accustomed to the World Cup hosts after spending the last five years playing in Russia, impressing recently at Rostov and being linked with a move to a bigger league after the tournament.
Karim Ansarifard and Mehdi Taremi are also a source of goals.
GROUP GAMES
Iran opens on June 15 against Morocco before taking on Spain on June 20 and Portugal on June 25.
Favourites to win the World Cup 2018:
1. Germany (4 previous wins and 8 finals)
2. Brazil (5 previous wins and 7 finals)
3. Spain (1 previous win and 1 final)
4. Italy would usually be here but the team that has won 4 time and reached the final 6 times, the recently 2006, failed to qualify for the first time since 1958!
Instead this slot goes to Argentina ( 2 previous wins and 5 finals)
5. France (1 previous win and 2 finals)

Only countries from Europe or South America have ever won the World Cup.