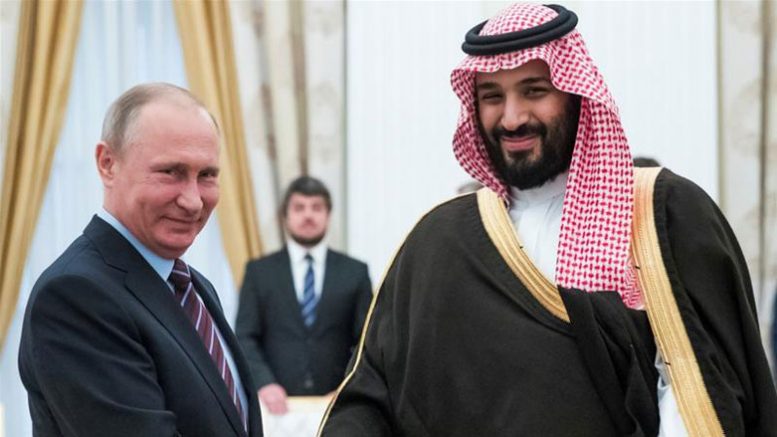 Saudi Arabia has relaxed its bug-damage specifications for wheat imports from its next tender onwards, intending to open the door to Black Sea imports from Russia and strengthening ties with Russia beyond energy cooperation.

Saudi 2030 is currently investing billions of dollars increasing public spending to improve the quality of life of its citizens. The program is parallel with the EU’s Horizon 2020, Dubai 2020 and Oman 2040.

Russia has bene strengthening ties with Turkey and the Middle East in recent years in energy, agriculture and military deals.

Russia has long sought access to Saudi Arabia’s wheat market as Moscow tries to take further market share in Middle Eastern and North African wheat markets from the European Union and United States which are seen as unstable due to Brexit and Donald Trump.

Wheat from the Black Sea did not previously meet Saudi specifications for zero-pest damage, but the governor of state grain buyer SAGO, Ahmad al-Fares, said that the specifications will be relaxed to 0.5% from the next tender.

Saudi Arabia had been one of the last Middle East markets not dominated by Black Sea wheat, Euronext wheat futures fell in opening trade after the news, but later steadied as Chicago prices turned higher.

The change has wider implications as Riyadh, which regards the United States as its most important ally, moves closer to Moscow, with Russian President Vladimir Putin due to visit Saudi Arabia in October.

Saudi Arabia had started to drift away from the rest of the Middle-East, Balkan and Central Asian regions leaning heavily to the USA, gaining criticism from neighbouring countries.

Saudi Arbia’s move to Moscow follows a region wide pattern of realignment in recent years. In Syrian peace talks the USA was no invited to the negotiations with Turkey, Russia and Iran instead acting as negotiators.

Russia, which has lobbied heavily for the wheat specifications to be relaxed, is interpreting the change as a green light to go ahead and start supplies, it has been suggested by inside sources.

“This could be a game changer, and is moving the goal posts for German and Baltic States wheat markets. Without this exclusivity, German and Baltics wheat will have to price themselves into other markets, probably targeting Algeria,” one European trader said of the development.

Algeria effectively precludes wheat of Black Sea origins due to a low bug-damage requirement, while Iraq mainly sources its wheat from Australia, the United States and Canada mainly due to contracts imposed during the US invasion.

Analysts said the move was a further sign of warming ties between Saudi Arabia and Russia since King Salman visited Moscow in 2017, the first Saudi monarch to do so, although the two countries stand on opposite sides with regards to issues connected to Syria and Iran.

“Reshaping the economic ties with many countries east and west is aimed at creating balance and this is a good policy approach by the crown prince (Mohammed bin Salman),” Saudi economist Fadl Alboainain said.

Riyadh appears to be hedging its bets after coming under attack by US lawmakers over the Yemen war and last year’s murder of journalist Jamal Kashoggi in Turkey, allegedly by Saudi agents.

“It’s to be expected in many ways given that Russia and Saudi Arabia have been cosying up over the last four years,” John Sfakianakis, chief economist at Gulf Research Center, said.

“Since they buy barley from Russia anyway it makes sense to buy wheat as well as they diversify their price and supply options.”

The two oil giants, once seen as rivals in crude markets, have joined forces to prop up oil prices at a time when US President Donald Trump was pressuring Riyadh, the de facto leader of the Organisation of the Petroleum Exporting Countries, to pump more crude and put a lid on prices.

By ignoring Trump’s demands and by not inviting the US as negotiators in to Syria and Yemen the US grip on the Middle-East is all but over.

“The trust which Saudi and Russia built on the back of oil negotiations and agreements has helped expand economic and commercial ties with and put Russia on the map of Saudi interest to boost Vision 2030 objectives,” said Alboainain, adding that food security was one key goal.

Oman recently moves it’s military contract for support form the UK to the US whilst many other regional states look to Russia as the new arms for hire in the region.

The world may not have ended, but it is running out of Hummus!