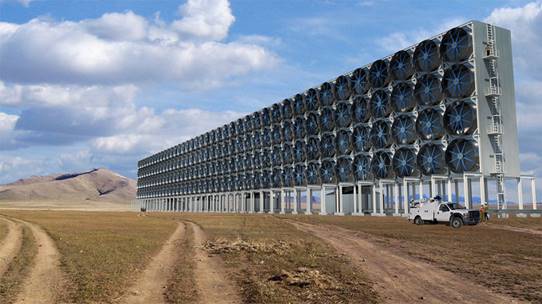 Pulling carbon dioxide (CO2) from the air and using it to make synthetic fuel seems like the ultimate solution to climate change.

Instead of adding ever more CO2 to the air from fossil fuels, we can simply recycle the same CO2 molecules over and over. But such technology is expensive, about $600 USD per ton of CO2, by one recent estimate. Now, in a new study, scientists say future chemical plants could drop that cost below $100 USD per ton, which could make synthetic fuels a reality in places such as California that incentivise low-carbon fuels.

Those numbers are “real progress,” according Chris Field, a climate scientist at Stanford University in Palo Alto, California. That’s because the new study bases its numbers on data and costs from a real pilot facility, whereas others have relied on scientists’ best guesses of how CO2 capture technologies scale up. “These guys actually have something you can measure,” says Stephen Pacala, an ecologist with Princeton University who is chairing a panel on carbon removal technologies for the National Academies of Sciences, Engineering, and Medicine.

Until now, the cost of climate change has been all about projections. Climate scientists say countries will need to drop CO2 emissions to near zero by midcentury and then remove more CO2than they emit, if the planet is to avoid a catastrophic 2°C warming. Numerous so-called negative emissions technologies exist, including growing perennial plants and trees to make biofuels, and sequestering carbon in soils. One of the most compelling, known as direct air capture (DAC), uses giant banks of fans to blow air through a solution that contains a CO2-capturing chemical. Once purified, the captured CO2 can be injected underground or used to make commercial products, such as fuels or plastics. But in 2011, a review panel of the American Physical Society found that DAC would likely cost about $600 per ton of captured CO2.

That didn’t deter David Keith, a physicist at Harvard University who co-founded a company focused on DAC. In 2015, Carbon Engineering launched its first pilot plant for capturing CO2 in British Columbia in Canada. After capturing the CO2 in solution, the plant transfers it into a solid, which when heated releases it in a pure gas stream. The crucial CO2-capturing chemical is recycled. After 3 years, Keith and his colleagues had collected enough data to calculate the plant’s efficiency—and project the costs of building a commercial scale plant with the same technology. The results: Their technology can capture CO2 for between $94 and $232 per ton, they report today in Joule.

The company has also built a pilot operation to turn captured CO2 into a variety of liquid fuels, including gasoline, diesel, and jet fuel. A renewable energy–powered electrolyzer first splits water into hydrogen (H2) and oxygen. The H2 is then combined with CO2 to make liquid hydrocarbons using conventional chemical engineering technology. If the CO2 is captured at the low end of the cost range, the company says can produce its synthetic fuels for about $1 per liter, says Steve Oldham, Carbon Engineering’s CEO.

That’s more expensive than most fuels today, but not by much. And because the process recycles carbon from the air, it would constitute a low-carbon fuel, something that places such as California are increasingly requiring in their fuel mixes, and which command a premium price. That could drive a market for DAC plants that would likely drive costs down further, Oldham says. Still, Field cautions that the technology isn’t a silver bullet for combatting climate change—there’s no way yet to know whether it can scale up quickly enough to alter CO2 levels in the atmosphere. “There is a long way to go to see whether it will have any large-scale impact.”