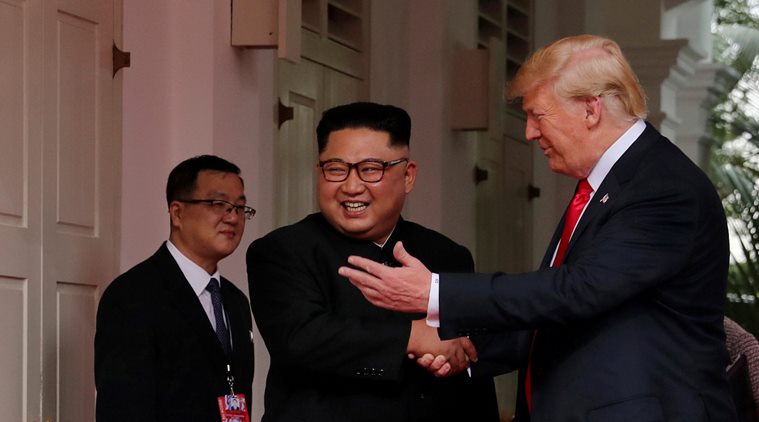 It is no secret that US President Donald Trump made a balls up of the North Korean nuclear crisis.

Trumps wild threats of total nuclear war and invasion did not go without retaliation. North Korea in retaliation developed some of the world’s most powerful and longest ranging nuclear missiles capable of not only reaching, but destroying the USA in minutes.

Every time Trump tried to call North Korea’s bluff, they demonstrated their capabilities by firing a non nuclear version of their war heads into the sea off the coast of the US.

Trump’s bully boy tactics were clearly not working and the world was scared. North Korea are powerful and could have escalated the situation beyond threats at any moment. North Korea also had the backing of Russia and China who wanted to see the end to US military presence on the Korean peninsular.

So when North Korean leader Kim Jong-Un offered the olive branch by demolishing his nuclear testing facilities (because they had already achieved nuclear technology far beyond the US capabilities) and offering a peace summit in Singapore with the US, the world was shocked when Trump declined the offer of peace.

North Korea was forced to remind Trump that although they had destroyed their nuclear research and testing facilities, they were still very capable of using their technology at short notice. Claiming that North Korea had only developed the technology in the first place as a precaution against hostility and threats made by Trump including live military exercises the US conducted along the Korean border and in Korean airspace and waters.

The world signed in relief when Trump finally backed down and agreed to the summit in Singapore.

The summit itself from the start was quite a remarkable sight. Trump’s trademark bully boy hand shake more a pull and attempted assault than a symbol of trust was gone and Trump’s body language analysed by body language experts was one of “despair and subservience”.  Grinning with thumbs up in an awkward sheepish stance Trump looked every part the less professional and less charismatic of the two leaders.

What happened at the summit

The US agreed to end all war games on and around the Korean peninsular and to remove any military threat to North Korea.

The move is seen as a big concession to North Korea and appeared to take US allies by surprise, as well as Trump supporter in the US.

Meanwhile, North Korean state media said President Kim had accepted an offer from President Trump to visit the US.

KCNA news agency said President Kim had invited Trump to visit Pyongyang “at a convenient time” and Trump had also invited Kim to the United States.

In his first reported comments since the talks, Kim said it was “urgent” to halt “irritating and hostile military actions against each other”.

He said the two countries “should commit themselves to refraining from antagonising” each other “and take legal and institutional steps to guarantee it”, KCNA reported

The Kim-Trump summit – the first such meeting between the two countries – centred on nuclear disarmament and reducing regional tensions. It concluded with a one-page agreement.

In the press conference afterwards, however, Trump added another announcement: the cancellation of all military exercises in the region.

The drills, often called “war games”, are held in South Korea with local forces and US soldiers stationed there, however they often infringe on North Korea’s naval and air space as well as acting as a clear threat to the north.

Trump also said he wanted to bring all US troops home – although he did not specify a time frame for the military withdrawal from Korea and surrounding areas.

Trump said the drills were “provocative” even though the US has previously defended them and there were suggestions that US allies had not been forewarned of this move.

South Korea’s Presidential Blue House said it needed “to find out the precise meaning or intentions” of Trump’s statement.

South Korean President Moon Jae-in spoke by phone with Trump for 20 minutes late on Tuesday, but an official readout of the call made no mention of military exercises, according to Reuters.

Should Trump fail to deliver on his promises to withdraw then North Korea would of course be under no legal obligation to uphold their commitments either.

Did the Pentagon know?

The previous day US Defence Secretary Jim Mattis told reporters he did not believe that troop levels were on the agenda. When asked if he would know if such discussions were planned, he said, “Yeah, I sure would.”

However, the Pentagon has since denied that Mattis was caught off guard. He was consulted ahead of time, said Pentagon spokesperson Dana White.

In a statement, she said: “Our alliances remain ironclad, and ensure peace and stability in the region.”

It is however highly unlikely that all of the appropriate persons were aware of the intended move to withdraw.

What else has Donald Trump said?

In a flurry of tweets later on Tuesday, Trump said there was “no limit” to what North Korea could achieve if it gave up its nuclear research program.

He thanked Kim for “taking the first bold step toward a bright new future for his people” and said the world had taken “a big step back from potential nuclear catastrophe”.

What are the war games?

The US maintains at least 30’000 troops in South Korea plus tens of thousands of additional troops in off shore bases and in Japan. Once a year it brings in others, typically from its Pacific base in Guam, to join large-scale drills.

Trump said scrapping them will save a “tremendous amount of money”, but he added that they could be reinstated if co-operation from the North declines.

What else did they agree at the summit?

The summit began with a handshake, unimaginable just months ago.

Trump and Kim – who traded vicious insults last year – gripped each other’s hands in front of US and North Korean flags.

After a one-on-one meeting, followed by wider talks with advisers and a working lunch, they presented their agreement.

It said the two countries would co-operate towards “new relations”, while the US would provide “security guarantees” to North Korea.

Observers say the document lacks substance, in particular on how denuclearisation or demilitarisation would be achieved.

However, speaking to reporters after, Trump said:

Several reporters asked whether Trump had raised the issue of human rights with Kim, the US president said he had, and repeated his description of Kim as “talented”.

Why the UK could bring the peace treaty crashing down

The UK remains the only country to refuse to withdraw its troops from Korea. The UK maintains a heavy navel presence off the coast of North Korea, something which will have to also be withdrawn for North Korea to truly turn down it’s heavy nuclear arsenal.

What does the future hold?

It seems an impossible thought to contemplate a unified Korea. Yet Kim seems to be a leader of impossible things. However, there are many hurdles to overcome first.

North Korea must first find it’s place on the global stage before it can consider reunification.

Nothing however, should take away from this momentous step towards peace and stability.