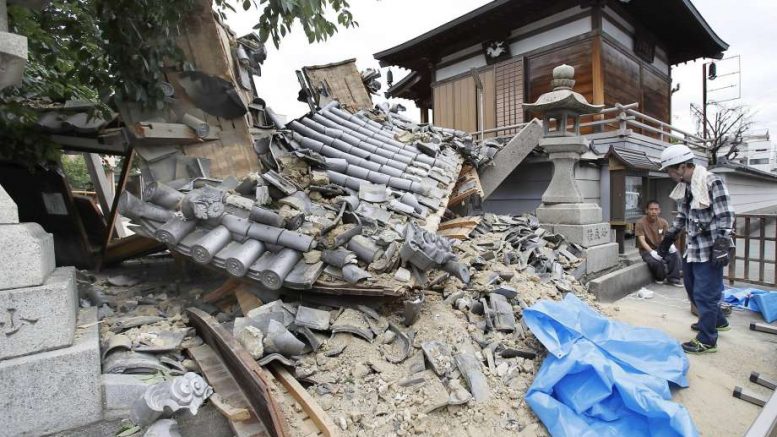 Deaths have been confirmed following g a 6.1-magnitude earthquake that has hit Osaka.

Victims include 9-year-old girl knocked down by concrete wall at her school.

A 9-year-old girl is among three people killed and dozens seriously injured following a powerful earthquake that struck Osaka during this morning’s Monday morning rush hour commute, knocking over walls and setting off scattered fires.

The magnitude 6.1 earthquake struck shortly after 08:00 local time, north of Osaka at a depth of about 13km (8 miles), the Japan Meteorological Agency said.

The strongest tremors were north of Osaka, but the quake rattled large areas across western Japan, including Kyoto, the agency said.

One victim, a 9-year-old girl who was knocked down by a concrete wall at her primary school as she walked by, caused emergency service workers to break down in tears as they searched for survivors in the rubble.

An elderly  gentleman in his 80s also died in the collapse of a concrete wall in Osaka city.

Another victim, an 84-year-old man in nearby Ibaraki died after a bookscase collapsed and fell on top of him at his home, according to city officials.

The quake knocked over walls, broke windows and set off scattered building fires. Interiors of homes, offices and stores weren’t left in tatters.

The morning commute was disrupted, as dozens of domestic flights in and out of Osaka were grounded, while train and subway service in the Osaka area including the bullet train were suspended to check for damage. Passengers were seen exiting trains on the tracks between stations.

The number of missing persons continues to rise as rescue efforts take full force and emergency services try to rapidly repair damage to critical infrastructure. Japan has some of the world’s fastest repair and recovery times.

Trave adivce is to avoid the district unless you are part of a rescue and repair mission.