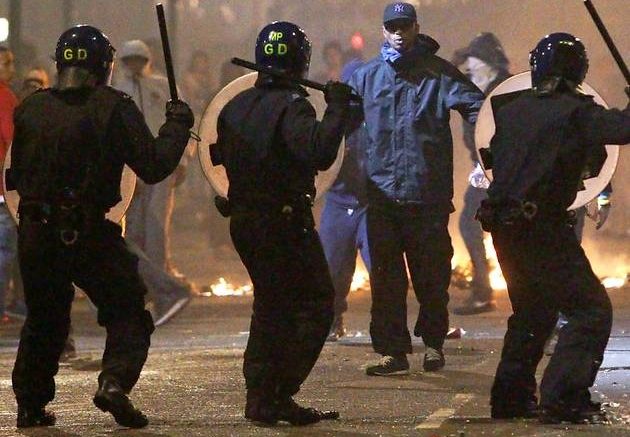 New York City has the second highest crime rate in the western world, yet it’s 8.5 million inhabitants and 2 thousand CCTV cameras and murder rate of 300/year are all dwarfed by hyper-city London with over a million CCTV camera, police armed with machine guns, terror attacks, violent gang wars, knif e, gun and acid attacks all despite some of the strictest laws and heaviest policing in the world.

In 2018 according to British paper The Sun, London has so far has 64 murders per month (excluding terror attacks) with thousands of other serious crimes each month.

Suicide was recorded as the most common cause of death in London for males over 35. The city’s ‘underground’ rail system accounting for depressingly regular a daily toll.

US president Trump has lashed out at Theresa May accusing her of loosing control of the streets after a US tourist was attacked and raped in London.

The 22-year-old woman, who was on holiday in the capital, was kicked out of her can after her friend vomitted in the early hours of Sunday, 3 June 2018.

Spilling food or drink or vomiting will not only get you kicked out of your cab in London but can see you land a four figure fine.

She said she has “no recollection” of what happened then, but CCTV footage from the city with over 1 million cameras accessible to the police, shows the friends walking with two unknown men along Haymarket at 03:00 am.

One of the men is seen carrying the victim to a nearby doorway, where police believe she was subsequently attacked and raped.

The woman took herself to A&E the next morning where doctors examined her. Police officers spoke to her there and an investigation was launched by the Child Abuse and Sexual Offences Command. (All sexual offences in the UK including touching a lady’s bottom in a night club or kissing somebody on the cheek in celebration as counted in the same group as child sex offences.)

Detectives have now released a CCTV image of a man they wish to question in connection with the attack, but have no leads and no arrests have been made.

A Scotland Yard spokesman said: “Officers spoke with the woman – an American national who was visiting London on holiday – at the hospital.

“She recalled being told to get out of a taxi in the early hours of the morning after her friend had been sick, but had no recollection of subsequent events prior to waking up and seeking treatment for her injuries.

“Analysis of CCTV showed the woman in the company of her friend and two unknown men in Haymarket, at around 3am on Sunday June 3rd. One of the men is seen to carry the woman to a nearby doorway, where the available evidence suggests she was raped.”

Earlier in 2018 US tourism authorities advised US citizens to avoid London over “serious safety concerns”.

The risk to tourists in London in 2017 and 2018’s first 6 months placed the city in the same category of travel warning as cities in; Kosovo, Bosnia, Syria, Somalia, South Africa, Egypt and Mexico.