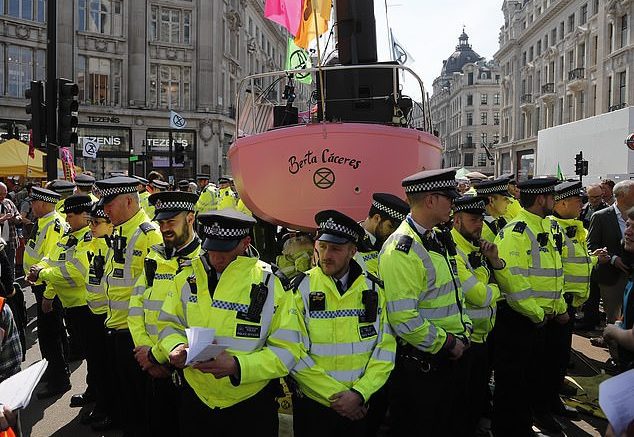 Extinction Rebellion has announced that they will end their ‘indefinite’ climate change protests this week in London after claiming success in their bid to open a “space for truth-telling”.

The demonstrators caused widespread disruption in the capital last week and were planning a march to its financial hub, but their efforts will go no further.

Blockades at Marble Arch and Parliament Square will finish with a ceremony at Speaker’s Corner in Hyde Park at 17:00 local time on Thursday (tomorrow), although the group has hinted that more action could be on the way at a later date.

In a statement, they said: “We will leave the physical locations but a space for truth-telling has been opened up in the world. The truth is out, the real work is about to begin. The international rebellion continues. It is now time to go back into our communities, whether in London, around the UK or internationally. This movement is not just about symbolic actions, but about building the necessary resilient and regenerative culture that the world needs now. Expect more actions very soon.”

The group originally vowed to continue the protests indefinitely until the UK’s laws on climate change were changed.

Police have made hundreds of arrests as a result of the protests, which have continued in earnest this week.

On Monday, at least 100 activists laid down on the floor in the lobby of the Natural History Museum in a stunt organisers called a “die in”.

Some wore red face paint, veils and robes as they covered the area beneath the famous skeleton of the blue whale for about 30 minutes, making it difficult for visitors to cross the space.

Despite the continued disruption, which was criticised by Met Police Commissioner Cressida Dick, a Sky Data poll has found that most Britons have been inspired by the protests.

The majority of civilian complaints came from London workers trying to get to and from work or finding themselves stranded due to tube cancellations. The extreme stunts did cause a noticeable loss of respect from the public for an otherwise widely supported cause.

While 53% of the UK wide public asked oppose the extreme tactics, which have included protesters gluing themselves to trains, a clear majority are sympathetic to the policies they are pushing for 60% approve, while just 20% do not, 20% were indifferent.

This was a different story as is much of UK politics within London itself where of those who responded (2,500 asked, 972 responded, percentages rounded to the closest whole number) 81% opposed, 4% supporting the tactics used and 15% stating they were indifferent towards the tactics used, which saw wide spread cancellations and delays of public transport and roads blocked. 86% approved of the cause itself with 9% objecting to the cause and 5% stating they were indifferent.

Extinction Rebellion want urgent action to halt climate change and to stop the decline in biodiversity, and have called on the government to reduce UK carbon emissions to net zero by 2025. Something sources from Parliament say is not a likelihood nor Parliament’s “main concern”.

Among their supporters are actress Emma Thompson and 16-year-old activist Greta Thunberg, who started a school strike movement by skipping lessons to demonstrate outside the Swedish parliament for months.

The teenager met with British party leaders during a visit to Westminster this week and also made time to address hundreds of the climate change protesters, telling them that humanity was at a crossroads.

During her chat with the politicians, the Nobel Peace Prize nominee mournfully said: “We probably don’t even have a future any more. That future has been sold so that a small number of people can make unimaginable amounts of money. It was stolen from us every time you said ‘the sky is the limit’.”

Environment Secretary Michael Gove told her: “We have not done nearly enough. Suddenly in the past few years it has become inescapable that we have to act. The time to act is now, the challenge could not be clearer, Greta you have been heard.”

The protests saw hundreds of civilians and celebrities as well as former politicians ruin their careers and gain criminal records as they were taken into the cells during the protests. Over the bank holiday weekend Met Police announced fears they may run out of cells in central London zones as the number of people the police ‘wished to speak to’ rose into the thousands.

David Attenborough’s new Netflix documentary “Our Planet” skips his usual impartial style of referring to geographic land marks instead of naming individual countries by naming nations directly involved in causing climate damage. The series explains the extent of the damage caused, the reasons and the implications this has for wildlife, nature and humanity. Episode 5 shows OMAN as one of the last bastions of truly wild nature on Earth demonstrating the empty quarter, the Arabian Leopard and Salalah Monsoons.

To find out more about Extinction Rebellion visit their website at: https://rebellion.earth