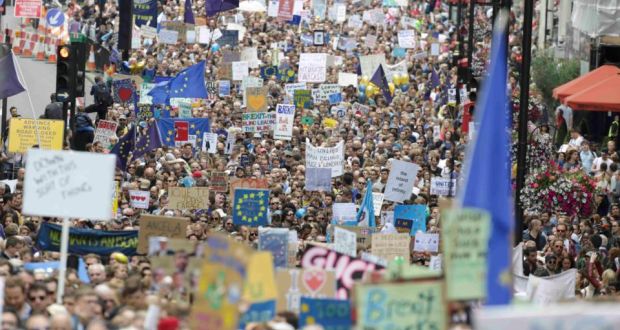 At least 100’000 pro-EU supporters attended one of the UK’s largest ever protest so in London calling for Brexit to be stopped.

Tens of thousands of right wing ultra nationalists met the protesters, burning EU flags, chanting WW2 Nazi chants and and calling for all non whites and non Christians to be deported, to a seemingly non disclosed country.

People travelled to London from across the UK nations to attend the march, organised by People’s Vote UK, on the second anniversary of the EU referendum.

A counter-protest was held in Westminster by thousands of those in favour of leaving the European Union. Such counter demonstrations soon turned to criminal damage, violence and racist chants including IRA chants, Nazi salutes and threats towards non whites and non Christians. On the same day England supporters in Russia’s 2018 World Cup were warned that continued use of Nazi Salutes, monkey noises and IRA chants would result in the England team being disqualified.

Liberal Democrats leader Sir Vince Cable addressed those who attended the Pro-EU march, saying: “My message today is a very simple one: keep fighting, keep hoping, we will win.”

Some attendees chanted “where’s Jeremy Corbyn?” during the march. The Labour leader changed his stance on Brexit to now be opposed to another referendum on EU membership. Many Labour Party members and supporters saw this as a sellout coating Labour and Corbyn a large amount of support all but killing off Labours hopes of winning the next general election.

Corbyn was visiting a refugee camp in Jordan on Saturday. A Sky News journalist accompanying him on the trip asked him to comment on camera about the unrest back in London, but he declined.

The pro-EU protests organisers include some of the most senior figures in British politics, including Labour peer Peter Mandelson, Lib Dem Peer Paddy Ashdown and Tory grandee Ken Clarke.

The People’s Vote campaign says on its website it is “run by Open Britain”. Open Britain is a limited company formerly known as the In Campaign, which was designated by the Electoral Commission as an official lead campaign group in the referendum along with Vote Leave.

Several pro Brexit groups have in the two years after the referendum been found to have breached campaign laws on accuracy of ‘facts’, financial irregularities and a whole list of alleged breaches of regulation.

Lord Mandelson, Tony Blair’s former director of communications, is listed a current director for the pro-EU limited company which organised the weekend’s protests.

The protests saw politicians, citizens and campaigners from across the UK walk from Pall Mall to Parliament Square, calling on the government to listen to their voices and give them final vote on wheather or not to stay in the EU after the final details of any Brexit deal had been made.

Among those taking part were farmers, doctors, teachers, delivery drivers, students, fishermen and veterans from the Armed Forces – as well as former supporters of Brexit, according to Sky News UK.

“It’s two years on now. Things have changed. Europe has changed. We should have another say.” One protester said.

Another accused the government of being incompetent and winning the last referendum by lying about the facts and figures.

“When the vote took place, we could not have anticipated how incompetent this government would be on negotiating. It’s not good enough to say ‘the people said this at one point’…”

Matthew Mann, originally from south Gloucestershire, who moved to the Netherlands in 2016 for work, said: “I’m here to show what a European looks like. I’m married to a French wife, I have two children who are dual national, and we live in Holland and are caught up in this administrative mess. I have lived and worked across Europe, it’s home.”

Brits make up one of the largest immigrant populations in the EU with over a million Brits living in Spain, France, Italy and Greece. Famed for bad behaviour, drunken crimes, not working or paying taxes and living in all English communities without intergrating, Brits are some of Europe’s most disliked immigrants. Yet ironically Europe’s most right-wing nation.

There was a cross-party presence at the march, with members of the Conservatives, Labour, Greens and Lib Dems all calling on the government to allow a vote after the final deal that is reached with the EU.

Meanwhile, Boris Johnson has urged the prime minister to deliver a “full British Brexit”, with International Trade Secretary Liam Fox warning that the UK was not “bluffing” about being prepared to walk away from talks with Brussels.

In a strong blow to the government the London Chamber of Commerce announced that many of the UK’s largest companies will no longer be supporting Britain with the likes of Airbus now making final and formal arrangements to move their companies to the EU mainland.

Such moves would create tens of thousands of unemployed people in Britain and cause losses in the billions to the UK economy.

Following the UK’s multiple credit rating downgrades since Brexit vote, two years ago, this latest blow is set to be the nail in coffin of the UK on the global stage. Broke, corrupt and disorganised the UK has never been in a weaker financial or political situation with the SNP vowing to deliver Scottish Independence within the next few years and pressure mounting for Northern Ireland to be returned to Ireland, as the UK’s overseas territories set to all but disappear by Brexit day.