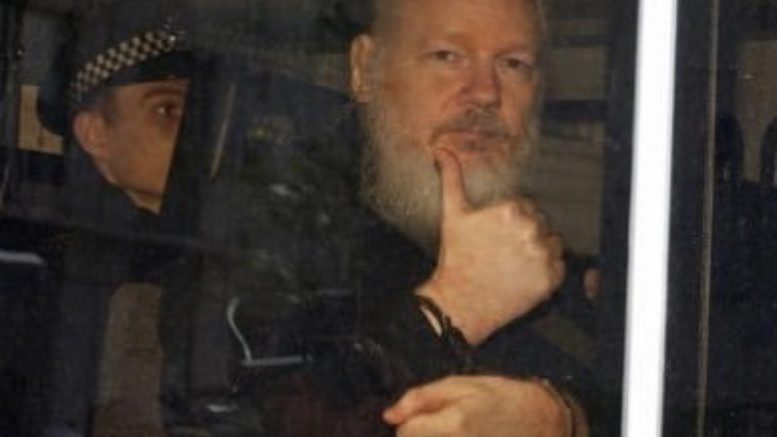 Julian Assange has been arrested for the second time today, this time on a US FBI warrant

The British courts are working on over time today. at 9 am Ecuador revokes Assange’s asylum (Read here).

At 10 am Assange was arrested for jumping bail (Read here).

The Wikileaks founder, Julian Assange, 47 has now been further arrested on behalf of the USA on an FBI warrant for conspiracy charges relating to the largest ever US government and military data breach in history.

LONDON — British authorities further arrested WikiLeaks founder Julian Assange on today (Thursday) in response to a US extradition request, and a US federal court unsealed an indictment charging him with a single count of conspiracy to hack a classified Defense Department computer.

London’s Metropolitan Police said in a statement that Assange, 47, was “arrested on behalf of the United States authorities” and would “appear in custody at Westminster Magistrates’ Court as soon as possible.” British police originally sought custody of Assange for jumping bail after Sweden requested his extradition in a separate case stemming from sex crime allegations.

In an indictment unsealed hours later, Assange was accused of conspiring in 2010 with Chelsea Manning, a U.S. Army intelligence analyst then known as Bradley Manning, and others to illegally obtain secret U.S. military and diplomatic documents whose dissemination could be used to injure the United States.

While he was campaigning for president, Donald Trump repeatedly expressed appreciation for WikiLeaks’ publication of stolen emails damaging to the campaign of Democratic candidate Hillary Clinton.

“WikiLeaks — I love WikiLeaks!” he said in October 2016 at a rally in Pennsylvania, waving a report on the latest disclosures. “Boy, I love reading those WikiLeaks,” Trump said a few days before the election after a new dump of emails.

Asked Thursday about those remarks, President Trump told reporters: “I know nothing about Wikileaks. It’s not my thing. And I know there was something having to do with Julian Assange. . . . That will be a determination, I would imagine, mostly by the attorney general. . . . I know nothing really about it. It’s not my deal in life.”

Before the US indictment was unsealed, Robinson said her client was “arrested not just for breach of bail conditions but also in relation to a US extradition request.”

Britain’s Home Office said in a statement that Assange “was arrested in relation to a provisional extradition request from the United States,” where he is “accused . . . of computer related offences.”

The US indictment, filed in federal court in March 2018 and unsealed Thursday, accuses Assange of agreeing to help Manning break a password to the Defense Department’s computer network in 2010. That, prosecutors alleged, would have allowed Manning to log in with another username. The indictment includes no evidence that the password-cracking effort actually succeeded.

Even before the password cracking, though, Manning had given WikiLeaks hundreds of thousands of classified records, prosecutors alleged. The material allegedly included four nearly complete databases, comprising 90,000 reports from the Afghanistan war, 400,000 reports from the Iraq War and 250,000 State Department cables.

Manning was imprisoned for seven years for violations of the Espionage Act and other offenses.

WikiLeaks used the arrest as a fundraising opportunity on Twitter.

“This man is a son, a father, a brother,” the group said in a tweet, above a headshot of Assange. “He has won dozens of journalism awards. He’s been nominated for the Nobel Peace Prize every year since 2010. Powerful actors, including CIA, are engaged in a sophisticated effort to dehumanise, delegitimize and imprison him.”

The group had earlier threatened long-term consequences if Ecuador turned Assange over to the British. “If President Moreno wants to illegally terminate a refu­gee publisher’s asylum to cover up an offshore corruption scandal, history will not be kind,” WikiLeaks said in a statement.

From Moscow, Edward Snowden, the fugitive American former National Security Agency contractor, described Assange’s arrest as a violation of press freedom. “Images of Ecuador’s ambassador inviting the UK’s secret police into the embassy to drag a publisher of — like it or not — award-winning journalism out of the building are going to end up in the history books,” Snowden wrote on Twitter. “Assange’s critics may cheer, but this is a dark moment for press freedom.”

In the last administration, Attorney General Eric H. Holder Jr. decided against pursuing prosecution of Assange out of concern that WikiLeaks’ argument that it is a journalistic organization would raise thorny First Amendment issues and set an unwelcome precedent.

The Trump administration, however, revisited the question of prosecuting members of WikiLeaks, and a court filing error in November revealed that Assange had been charged under seal.

Some federal prosecutors say a case can be made that WikiLeaks is not a journalistic organization. As if to lay the groundwork for such an argument, in April 2017, then-CIA Director Mike Pompeo, now secretary of state, characterized WikiLeaks as a “nonstate hostile intelligence service” and a threat to US national security.

Ecuador imposed tighter house rules for Assange last fall. Among the demands were that Assange pay for his medical and phone bills and clean up after his cat. Ecuador had been left with bills running into the millions of dollars over the past 7 years keeping their uneasy houseguest.

McAuley reported from Paris. Nakashima reported from Washington. Anthony Faiola in Miami and Rachel Weiner and William Branigin in Washington contributed to this report.