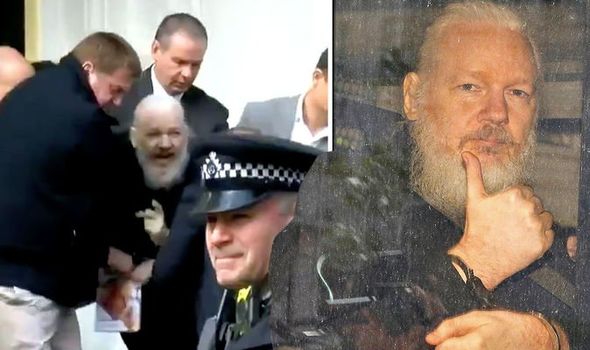 London’s courts today have processed Julian Assange at record speed operating international warrants, arresting Assange TWICE and dagger him kicking and screaming from the Ecuador Embassy all in the matter of a few hours. In a hope to speedily push through his extradition to the US to face charges.

Julian Assange plead not guilty to skipping UK court bail in 2012 just hours after his arrest today at Westminster Magistrates Court in London.

Without hesitation Assange was subsequently found GUILTY by London’s courts.

In his subsequent appearance in court in London, Assange was found guilty of breaching his bail, an offense that carries a prison sentence of up to 12 months. He pleaded not guilty to the bail-jumping charge.

Judge Michael Snow reprimanded Assange in court saying he demonstrated “the behavior of a narcissist.” The court was told that Assange resisted arrest at the Ecuadoran Embassy, shouting, “This is unlawful!”

The arrest was described by the Met Police at the scene as “he cut up a bit and tried to struggle”. Assange was dragged out handcuffed, kicking and screaming. The Met police had installed a cordon prior to his arrest no protesters for or against Assange were present. Only the Police, diplomatic staff and press were allowed through the cordon.

Assange could be further arrested for the offence of resisting arrest.

Assange is due to appear at a later date to be sentenced for the bail charge. He is scheduled to appear again in Westminster Magistrates’ Court via video link on 2nd May 2019 regarding the extradition matter.

Outside court, one of Assange’s lawyers, Jennifer Robinson, said Assange would fight extradition to the United States. She called the action against him “a dangerous precedent for all news media.” Robinson said she was seeking medical care for Assange, whose health she said has suffered during his time in the Ecuadoran Embassy.

The lawyer said Assange told her to thank his supporters and to say, “I told you so” — presumably a reference to Assange’s long-held prediction that the United States would seek his arrest and extradition.

Assange holds that he is a journalist running a news-media outlet. The US argues that Wikileaks is not a licensed news outlet and called Wikileaks “a non state intelligence agency”.