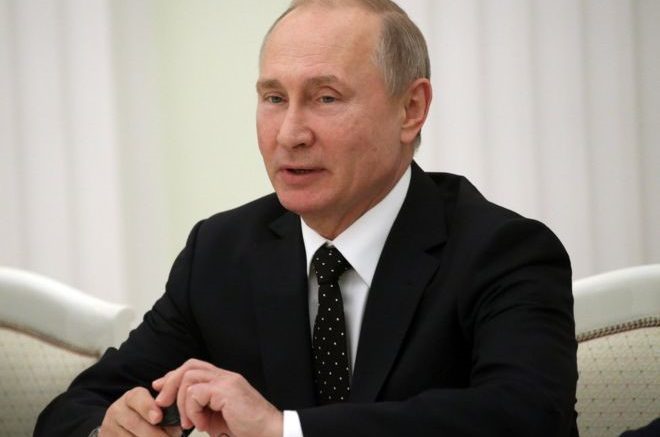 Russian President Vladimir Putin has criticized the United States for using pressure and sanctions to maintain its economic supremacy, saying it spawns chaos in global affairs

Speaking Friday at an investment forum in St. Petersburg, Putin said the U.S. attempt to “spread its jurisdiction to the entire world” challenges the global order.
He said globalization “becomes a parody of itself when common international rules are replaced with laws, administrative and judicial mechanisms of one country or a group of countries.”
Flanked by Chinese President Xi Jinping at the forum’s panel, Putin said the U.S. action against Chinese telecom giant Huawei represented an attempt to “blatantly squeeze it out of the global market.”
It is, he said, “the first technological war of the digital era.”
Putin warned that the “fragmentation of the global economic space, the policy of unrestrained political egoism” paves the way to “endless conflicts and trade wars … fights without rules between all.”
The Russian leader accused the U.S. of turning the dollar into an “instrument of pressure,” undermining trust in the U.S. dollar, the world’s major reserve currency.
He also criticized U.S. attempts to hamper the construction of the Nord Stream 2 pipeline intended to carry Russian natural gas to Germany and further on in Europe, saying it reflects the U.S. desire to win advantages for itself.
Putin hailed Russia-China relations, saying that their cooperation in the global arena is “a major factor of stability in global affairs.”
He emphasized that “we aren’t creating a military union and we aren’t working against anyone,” adding that Moscow remains open to expanding ties with the European Union and the United States.
Xi said Russia and China would coordinate their efforts in the energy sphere more closely.
The Chinese leader noted that the current global trade system needs fine-tuning but spoke strongly against protectionism, warning that globalization can’t be stopped.
Xi said that despite trade disputes between China and the U.S. they are closely interdependent and neither side wants to disrupt ties.
“Neither we, nor our American partners are interested in that,” Xi said. “I’m sure that my friend, President Trump, isn’t interested in that either.”
Trump said Thursday that he’ll make a decision about ramping up tariffs on China after he speaks with Xi at a G-20 summit in Japan this month.
Trump ordered tariffs of up to 25% on hundreds of billions of dollars’ worth of Chinese exports and his administration is preparing to extend them to $300 billion more — almost all items shipped to the U.S. from China. China has reciprocated with tariffs of its own, among other measures.