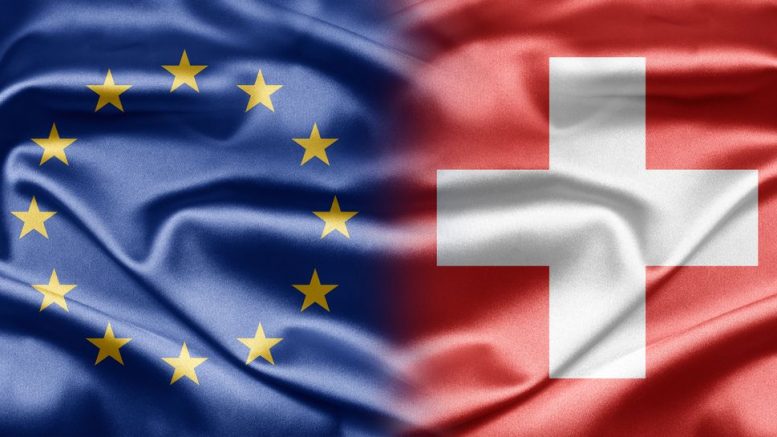 Decades-long row between EU and Switzerland has finally hit the tipping point – and it’s a stark wake up call to the UK.

If you want to buy or sell shares in famous Swiss companies such as Nestle, Zurich Insurance, UBS or Novartis from next week, your task is about to become a lot more complicated.

Switzerland and the EU have been at loggerheads for months over the implementation of a new treaty governing their trade relationship.

The EU has for a decade now wanted to formalise trading relationships with the Alpine country that are currently set out in more than 120 bilateral accords.

A quirk in the arrangement means that, while Swiss companies enjoy access to the EU’s single market, they do not always have to play by its rules.

Accordingly, the EU has sought to formalise the various trade agreements in a new treaty, which would effectively lock Switzerland into the single market and oblige it to accept new rules as and when they are brought in.

The benefit for the Swiss in signing up to this is that it would allow Swiss exports to the EU to continue uninterrupted and also enable the formation of an “electricity union” that would allow Switzerland to import energy from the EU if it needed it.

Amid frustration at the amount of time it was taking for the Swiss to sign the treaty the EU threatened last year that, unless a deal was done, it would no longer recognise Swiss stock exchange rules that permit the cross-border trading of shares.

That would deprive Swiss investors of the opportunity to buy or sell shares in EU-based companies on SIX, the Swiss stock exchange, which is Europe’s fourth largest exchange after Euronext (the exchange formed nearly 20 years ago from the merger of the Dutch, French and Belgian stock markets), the London Stock Exchange and Deutsche Boerse.

Switzerland retaliated by saying that, if the EU pressed ahead with such a measure, investors would no longer be able to buy or sell shares in Swiss companies on EU exchanges.

At the end of last year, when both sides were due to implement such measures in the absence of a treaty, the EU introduced a temporary measure enabling shares of Swiss companies to be traded on EU exchanges for a further six months.

Unfortunately, that temporary permit expires on Sunday, with the EU showing no sign of continuing with the arrangement.

Switzerland has indicated that, in the event of this, it will impose a new system obliging foreign stock exchanges to obtain permission from its government if they wish to continue hosting the trading of Swiss stocks. Anyone caught doing so without permission will face a fine or even imprisonment.

It could also lead to volatility in the trading of some stocks. Almost a third of all trading in Swiss stocks takes place on the London Stock Exchange. Likewise, more than half of SIX’s revenues come from the trading of shares in non-Swiss companies.

So all of this will be harmful for financial flows between Switzerland and the EU. It will make life harder for fund managers and insurers and also for the companies that will see trading in their shares disrupted.

The temptation will be for people to say that the biggest loser in this row is Switzerland. After all, it is hugely dependent on the EU, which accounts for nearly three-quarters of Swiss imports and which buys more than half of all Swiss exports.

If the row were ratcheted up, Switzerland could find itself experiencing shortages of goods before long, while its companies could find their export sales hit.

Yet it can also create a lot of inconvenience to investors based in the EU. Three of the most frequently-traded stocks in Europe – Nestle and the drug makers Roche and Novartis – are Swiss.

Unfortunately, the log-jam will not be cleared any time soon, as the Swiss parliament now looks highly unlikely to vote through any treaty.

Opposition to it has come from the Swiss equivalent of the Trades Union Congress and the centre-left Social Democrats, who do not want to see any weakening of Swiss labour laws, as well as the right-wing Swiss People’s Party.

It argues, as most Brexit supporters do in this country, that it would be unacceptable to sign up to the rules governing the EU’s single market while having no say in how those rules are adopted in the first place.

The more obvious point is that there is a lesson to be learned here for the UK which, after Brexit has happened, is going to have to open negotiations with the EU over the pair’s future trade relationship.

It has taken the best part of a decade for Brussels and Bern to formulate a treaty. The UK’s economy is getting on for four times the size of Switzerland’s – potentially rendering negotiations even more complicated and time-consuming.

If the recent fall out with Switzerland has shown anything it is that, one, the EU always comes out better off than the individual country, and two, the UK economy can not survive without the EU, decades of battles ending in an over all worse off position even if it does some how manage to manipulate loopholes for a few years during the formation of formal agreements. Switzerland has shows just how much worse off European nations are outside of the EU.

Agencies contributed to this article