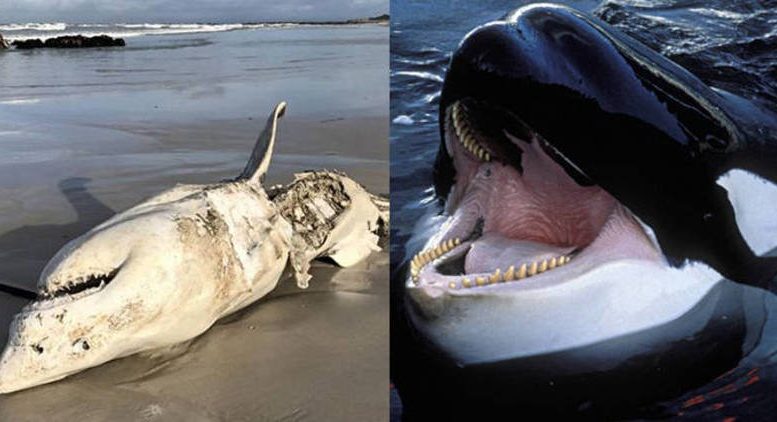 Experts believe Orca (killer whales) are behind the disappearance of great white sharks off the coast of South Africa, which have seen a significant drop in numbers in the last decade.

Orca are thought to be slaughtering great white sharks off the coast of South Africa by ripping out their livers.

Not a single great white has been seen off the beaches of False Bay in South Africa so far this year.

That’s compared to 50 sharks were spotted at the hotspot last year, already own from a average of 205 sightings between 2010 and 2016 .

Five great whites washed up along the coastline in 2017 with gaping wounds on their side with their livers having been bitten out by two Orca in the area.

Experts claim the predator ‘Killer Whale’ (Which are actually a type of dolphin) have acquired a taste for the sharks’ livers, which are rich in oil and fats, providing a valuable source of energy for the huge marine mammals.

The Orca bite a large slit in the side of the great whites after attacking as a pair and then suck out the fatty liver which is 300 KG meat delicacy in a phenomenon that has only recently been discovered.

The two Orca’s responsible – known as Port and Starboard as their dorsal fins hang to the left on one and to the right on the other – spurned their natural prey like seals having developed a taste for shark.

Tourists flock to False Bay every year to watch the sharks launching themselves out of the water around the nearby Seal Island.

But it’s been two years since the Shark Spotters Applied Research Programme has picked up a signal from any of the great white’s that had been tagged by scientists and were resident in False Bay.

“To our knowledge the absence of great white sharks from False Bayhas not been recorded or reported before. Great white sharks are top apex predators and we do not know how their absence from False Bay would impact the ecosystem. Neither do we know the causes for their disappearance. We remain hopeful that the great whites will return to False Bay and will announce our first sighting when this happens.”

South Africa’s Western Cape boasts some of the world’s best Great White Shark cage diving and thousands of adrenalin-hungry tourists flock there each year paying up to €150 a time to go down with them.

False Bay is the biggest bay in South Africa and Seal Island just 3 miles off shore with its deep water and 60,000 seals was one of the the best places to the predators breaching with seals in their jaws.

Tourists hoping to see the Great White’s from cages will now have to travel up the coast to Gansbaai until they return.

“A study in California showed that great white sharks were being attacked by pods of killer whales and driven away from feeding grounds. This is a complex issue which is something we are trying to better understand but we do know that killer whales have regional impact on great whites as seen in South Africa, California and Australia, Although the presence of killer whales will obviously have an effect on great whites, there are many other factors that come into play, and my research on them is ongoing in Gansbaai where they have just returned after a two year absence”.