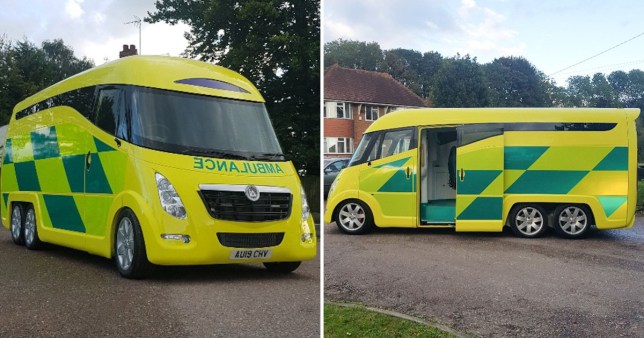 New ambulance design brings the hospital to the patient

Launched by International Ambulances, the vehicle comes complete with the latest equipment, including an x-ray machine and breathing devices.

A futuristic $300,000 USD ambulance that can reach speeds of 159 kph has been unveiled in eye-catching photographs.

The ACESO vehicle, launched by International Ambulances, is made from state-of-the-art aerodynamic materials and is larger than most conventional models.

It comes complete with the latest hospital equipment, including an x-ray machine, breathing devices and even specialist blood testing equipment and stroke scanners.

The treatment cabin is also designed to allow medics to treat the patient as efficiently as possible.

Chief engineer Phil Bevan said: “In everybody’s life the most important vehicle you’ll use is an ambulance. It gives you that golden hour between falling ill and getting into hospital.

“It needs to be in a safe and comfortable condition. Our ambulance does that in spades.

“We’ve made our ambulance one that is prepared for any challenge or type of situation.

“Most ambulances take the patient to hospital but ours takes the hospital to the patient.

“What we’ve done is make the patient area bigger and kept the crew cab area the same size.

“The stretcher is at the centre of the cabin meaning medics don’t have to stand up, but can sit down and wear a seat belt when moving.

“This means that two medics can be closer to the patient at all times. ”

Phil was inspired by his own negative experience when he was taken to hospital after severing nerves in one shoulder.

He added: “We’re going to save hundreds of lives. The ambulance enables crews to do their jobs to the best of their abilities.”

An NHS spokeswoman said that the UK would be interested in the new ambulances but the final purchases would be up to each of the 11 individual ambulance trusts across the UK to decide whether to commission the new model or opt to retain the older, cheaper models. Given Brexit Britain’s broken finances it is unlikely they will be taken up in large numbers in the UK market.