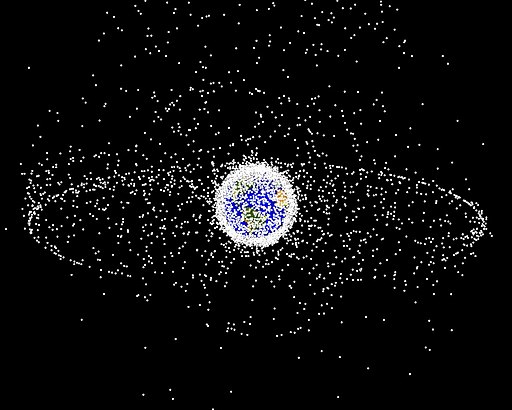 Recent studies have shown that the volume of dead satellites and man made space debris orbiting Earth are putting our planet Earth in danger.

A recent study by the European Space Agency (ESA) issues a stark warning over the amount of ‘dead’ satellites and man made space debris orbiting Earth.

Three thousand of the 4’500 satellites currently orbiting Earth are dead (non-functioning). Coupled with huge volumes of space debris from jettisoned parts of space craft and space exploration have formed a ‘shell’ around the Earth.

And the director general of the agency said this space debris poses a ‘very big danger’ to the planet.

A mission to detect and prevent hazards posed by meteorites was also suggested by the ESA, which said the human race does not want to be wiped out in the same manner as dinosaurs. For years NASA and the ESA have been discussing plans to form a global task force to combat any potential incoming astroids or meteors.

Worner also identified solar flares as a potential danger to Earth which requires the formation of a global defence.

The difficulty lies in the formation of a global cooperation and legal framework to ensure all nations work together and conflicting systems do not hinder the progression of defences and safety of the planet.

“We have a situation of meteorites – the dinosaurs died out because of a meteorite, most probably. We don’t want to be dying out because of a meteorite, and therefore we should have a look to that. And to make two things – to have observations to have early pre-warning, but at the same time… to really fight against it, to have what I call ‘playing billiards in space’, and together with the Americans, we are proposing a mission in that.”

“Then we have the space debris. Space debris, especially from upper stages, from adapters, from old satellites. We have about something like 4’500 satellites in orbit – only 1’500 are active, meaning 3,000 are dead. A very big danger. And therefore we are proposing a mission where we bring down some ESA-owned asset which is still flying around the Earth. And at the same time with the same mission we would also demonstrate that it’s possible to avoid future space debris by doing also some direct de-orbiting.”

Speaking at the opening session of the meeting, Worner said that given today’s technology it would be ‘smart’ to look at bringing samples back from Mars, rather than putting astronauts on the red planet.

“Therefore, we are looking for very a impressive mission, which should get samples back from Mars to have a very direct investigation of the samples here on Earth in our laboratories. This mission looks very simple – you fly to Mars, you get some samples back.”

However he explained it would involve an American rover collecting samples and leaving them in tiny containers on the planet’s surface, to be collected by a European rover once it had moved on to another area.

After finding the samples the European rover would put them in a bigger container and take them to a small launch space where it would be launched into the planet’s orbit.

“And then a European mission will go there, get this container and bring it back to the Earth.”

The councils bring together ESA’s member states and observers every two to three years to decide on new proposals and funding for ESA’s next years of work.