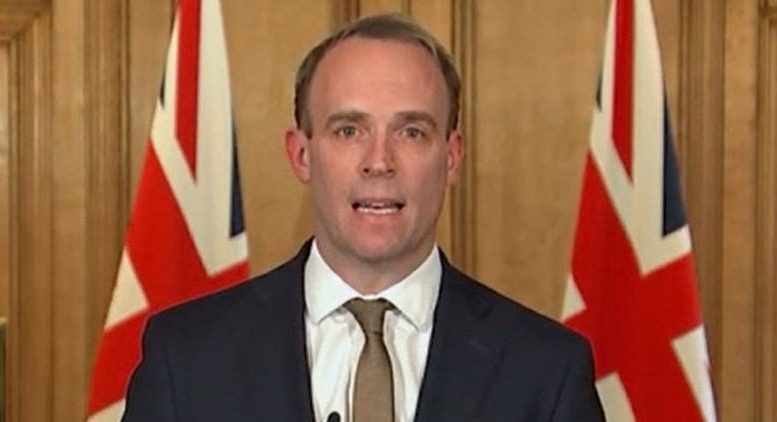 Dominc Raab, 46, has taken the reins of the UK government during the biggest global crisis since WW2.

Whilst every ambitious politician dreams of the day they may become the leader of their nation, none would want to take the reins of a government in the way Dominic Raab did on Monday night.

In the UK, the Prime Minister is not the head of state, the Queen is. As such there is no constitutional law for succession of a PM. In fact, there is no legal reason why the UK can not function without a PM, with ministers taking turns to lead meetings. However this is highly unlikely and power vacuums rather destabilising. To formally become PM, the political party in power must internally elect a new leader and the Queen must then give Royal Accent. This can take days or even weeks.

In emergencies such as this, a de facto leader may take the reins and powers without formally being given the title of Prime Minister.

Foreign secretary Dominic Raab found himself de facto leader of the country after Boris Johnson was taken into intensive care due to the worsening of his coronavirus symptoms on Monday.

A No.10 spokesperson confirmed Raab would “deputise where necessary” and on Tuesday he would dial in to the cabinet and lead the nation.

Raab has spent much of the last month trying to get Brits repatriated from across the globe amid the coronavirus outbreak. Millions of Brits live overseas with an estimated additional 1 million British tourists overseas on holiday at the time that lockdown came into place in the UK.

In his dual role as first secretary of state, Raab will take on the added responsibility of caretaker prime minister while his boss, Boris Johnson, is unable to lead the country from the intensive care unit at St Thomas’ hospital in central London.

Upon being appointed foreign secretary mid 2019, Raab was thrust into the transatlantic feud over the death of British teenager Harry Dunn, who was killed by the wife of a US intelligence agent when his motorbike was hit by a car driving on the wrong side of the road outside RAF Croughton in Northamptonshire on 27 August 2019.

Raab came under heavy criticism for failing to stop the suspect before they fled the country. The US does not extradite suspects to the UK, but the UK does extradite its citizens to the US.

Raab is a hard line Brexit supporter who said he would “probably not” describe himself as a feminist, and never strays from his hairline dedication to leaving the European Union. The UK left the EU on 31 January 2020 at an enormous cultural and financial cost.

As a result of Brexit, the EU has refused to share medical supplies with the UK. EU nations are currently supporting each other through the COVID19 crisis with debt sharing, hospital capacity sharing and medical staff and equipment sharing. There has been some tension after Germany refused to share the financial burden of Spain, Italy and France, three of the four worst hit nations on earth by the pandemic, the UK currently standing at 5th.

Raab is also the UK’s former Brexit secretary, when he said he would keep open the option of suspending parliament in order to prevent MPs blocking it. Raab memorably quit his cabinet role in protest against then PM, Theresa May’s doomed plan to leave the bloc in November 2018.

The former Foreign Office lawyer, who studied law at Oxford and his Masters at Cambridge, is the son of a Czech-born Jewish refugee who’s family fled the Jewish persecutions in 1938.  Raab is married to wife, Erika and has two sons. In 2019 he made a bid to take power in the Tory leadership race but failed to be voted into the final two. Raab claims his “interesting fact” about himself is that he is a Karate black belt.