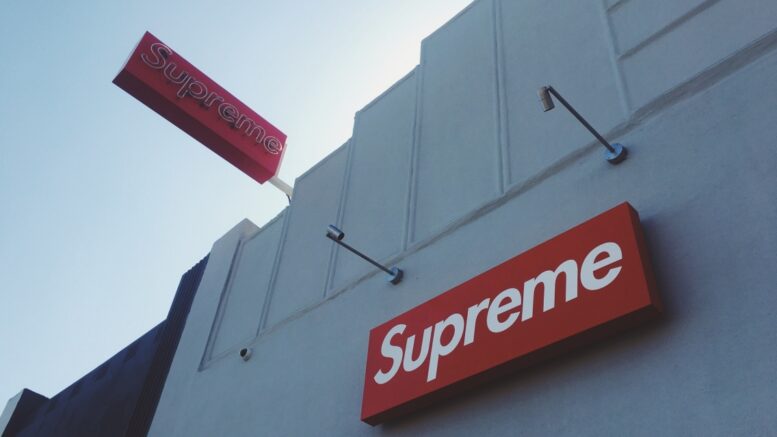 FACT BOX: Supreme, based in USA, owned by Vanity Fair Corporation (the original brand) and Supreme Italia are not the same company nor brand nor are they owned or founded by the same people.

Supreme, the New York streetwear brand now owned by VF (Vanity Fair) Corporation, is well known and loved world wide with items costing a few hundred USD each. However their distinctive red and white logo and font appears on some unusual items of apparel, also costing upwards of $150 USD per item. However some of these items weren’t made by the New York brand. They are the work of an Italian founded group of father and son ‘two man band’ companies that had hijacked Supreme’s look and logo – in other words, a replica, fake or blatant knockoff. These are not similar styles inspired by Supreme in a different label, these are styled and even labeled as Supreme.

However thanks to a combination of entrepreneurial creativity, a deep understanding of international legal systems and the quirks of trademark law, the whole thing seemed to be totally legal. In most countries, just not the UK.

Supreme (the counterfeit one) founders; Michele di Pierro (53) and his son Marcello (24) have been sentenced to 8 years and 3 years in custody respectively at a court in London, UK. The di Pierro’s London-based International Brand Firm Ltd. was simultaneously hit with a £7.5 million GBP fine ($10.37 million USD / €8.74 million EURO / 3.99 million OMR ) to be paid to the real Supreme, a fine not likely to be paid given the £300 GBP in the company’s accounts.

How did this happen? and… how did they – kind of – get away with it?

The counterfeit Supreme (some times referred to as Supreme Italia by the Italian media) filed trademark requests in various countries, including do Pierro’s native Italy, Spain, and China, where Chapter 4 Corp. hadn’t yet secured its registration.

The counterfeit Supreme started their manufacturing in the southern small fishing town of Bisceglie (Pronounced: Bee-Sheh-lyee-eh) in the province of Puglia (Pronounced: Poo-lyee-a) on the Adriatic coast. The resulting merchandise was undistinguishable from the originals, with a few additional items, such as the ‘Supreme Money Gun’, a plasting gun that fired fake $100 US dollar bills (very popular with instagram ‘influencers’ and ‘musicians’).

There is no such thing as one global, universal trademark or patent, trademarks have to be registered territory by territory. So even if your brand is well-known, if they did not claim the trademark, there’s a risk that someone else might. In some countries, such as Italy, regulators don’t verify whether anyone else has submitted a request for a similar trademark when you make an application. Meaning you may be paying for a trademark that later proves to be invalid if you didn’t do your own due diligence for conflict prior to registration.

The counterfeit Supreme, initially did not own any of its own stores, instead selling its apparel through smaller shops across Italy. Generating millions of Euro in revenue di Pierro senior’s social media accounts started to fill up with images and videos of first-class air travel, luxury cars and ‘testimonials’ from ‘fans’.

By 2017 the Di Pierro father and son had opened up ‘Supreme’ stores in Spain, including in the city centre of the wealthy city of Barcelona, modelled after and designed to replicate the real Supreme’s New York flagship store. It was reported that the Barcelona close flagship actually drew in greater crowds than the real flagship store in New York City. This was achieved by bolstering the original brand’s design range with a number of more affordable ‘novelty’ items such as skateboards, tech cases and office desk tat.

Finally VFC’s Chapter 4 was able to sue Di Pierro in Italian courts, where they labelled their organisation “parasitic competition”, Di Pierro accused the original Supreme themselves of being counterfeits. Di Pierro’s argument was based around an argument that in the 1980s, New York artist Barbara Kruger made posters with slogans including “I shop therefore I am” and “Your body is a battleground” using the same colours and fonts later adopted by Supreme. Kruger who was vocally critical of Supreme, once calling the brand “totally uncool jokers” dared VFC’s Chapter 4 to sue her for trademark infringement after she re-used her original font and colours in a 2017 art project. By this time VFC had registered the trademark. Supreme took no legal action.

By 2018, in China’s magazine city of Shanghai, Korean tech giant Samsung was launching its latest flagship smartphone in aa streamed event viewed online by at least 19 million people. Two ‘executives’ from the Italian company’s counterfeit Supreme appeared onstage with the real Supreme’s logo in the background. Samsung Electronics Co. assumed its partner was the real NYC Supreme, only following numerous consumer tipoffs that the executives on stage were not executives from the real Supreme did the Korean company back out of the deal. Despite this major set back for Di Pierro, he managed to successfully open a permanent and tangible presence in China by opening up a physical store in Shanghai.

Italian courts following the very public Samsung fiasco, ordered the seizure of all Supreme-branded products from Di Pierro’s stores and warehouses in Italy, but his physical outlets in Spain and China remained open. In open defiance and mockery Di Pierro started selling T-shirts with the Supreme logo that celebrated his conflict with the real Supreme. The last of his outlets continued to operate business as usual until Chinese and European Union regulators mutually agreed to finally recognise the New York company’s ownership of the brand.

In 2020, with Di Pierro’s Supreme physically closed but still very much operating online on Chinese sites such as “Wish” and “AliExpress” as well as peer to peer sites such as “Ebay”, Di Pierro returned to Pitti Uomo, Firenze, Italia (Florence, Italy) to promote a new business of his; clothes bearing the logo of Vision Street Wear. Another New York based fashion brand focusing this time on Slater orientated designs, owned by Authentic Brands Group LLC.

Di Pierro has now registered the trade mark for Vision Street Wear in the tiny enclave nation of San Marino.

Di Pierro and his son remain wanted fugitives in the UK having now both been sentenced to substantial jail time. The UK is no longer part of the European Union and faces little prospect of actually incarcerating the Di Pierros.