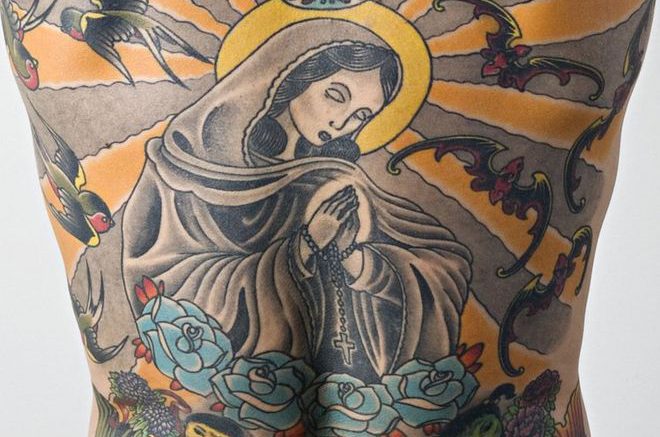 Meet the man who used his back as a canvas then sold his skin.

Tim Steiner has an elaborate tattoo on his back that was designed by a famous artist and sold to a German art collector. When Steiner dies his skin will be framed, until then he spends his life sitting in galleries with his back exposed.

“The work of art is on my back, I’m just the guy carrying it around.” says the 40 year old former tattoo parlour manager from Zurich.

Ten years ago, his then girlfriend met a Belgian artist called Wim Delvoye, who’d become well known for his controversial work tattooing pigs. (Then selling their skins as works of art once they died of natural causes.)

Delvoye told her he was looking for someone to agree to be a human canvas for a new work and asked if she knew anyone who might be interested.

“She called me on the phone, and I said spontaneously, ‘I’d like to do that.'” Steiner says.

Two years later following 40 hours of tattooing sessions, the image spread across his entire back, a ‘Madonna’ crowned by a Mexican style skull, with yellow rays emanating from her halo.

There are swooping swallows, red and blue roses, and at the base of Steiner’s back, two Chinese style Koi Carp, ridden by children, can be seen swimming past lotus flowers. The artist has even signed the work on the right hand side.

“It’s the ultimate art form in my eyes.” Steiner says.

“Tattooers are incredible artists who’ve never really been accepted in the contemporary art world. Painting on canvas is one thing, painting on skin with needles is a whole other story.”

“My skin belongs to Rik Reinking now. My back is the canvas, I am the temporary frame.”

As part of the deal, when Steiner dies his back is to be skinned, and the skin framed permanently, taking up a place in Reinking’s personal art collection.

“Gruesome is relative.” Steiner says to those who find the idea macabre.

“It’s an old concept, in Japanese tattoo history it’s been done many, many times. If it’s framed nicely and looks good, I think it’s not such a bad idea.”

As part of his contract, Steiner must exhibit the tattoo by sitting in a gallery at least three times a year.

His first exhibition took place in Zurich in June 2006 when the tattoo was still a work-in-progress. When the 10th anniversary fell last year, he was in the middle of his longest-ever exhibition, a whole year at the Museum of Old and New Art (Mona) in Hobart, Tasmania, working five hours a day, six days a week.

“Sit on your desk, with your legs dangling off, straight backed and holding on to your knees for 15 minutes, it’s tough. I did this for 1’500 hours. It was by far the most outrageously intense experience of my life. All that changed throughout the days was my state of mind, sometimes heaven, sometimes hell, always totally alert.”

The only thing separating Steiner from visitors to the gallery is a line on the floor, a line that that in the past some have crossed.

“I’ve been touched, blown on, screamed at, pushed and spat on, it’s often been quite a circus. I wasn’t touched a single time on this trip, it’s a miracle.”

When people try to speak to Steiner he doesn’t move or reply. He just sits still. “Many people think I’m a sculpture, and have quite a shock once they find out I’m actually alive.”

But Steiner rejects the idea that this is performance art. “If the name Wim Delvoye was not attached to this tattoo, it would have no artistic relevance.”

It is part of Delvoye’s intention, though, to show the difference between a picture on the wall and a “living canvas” that changes over time.

“I can get fat, scarred, burned, anything,” Steiner says. “It’s the process of living. I’ve had two lower back operations.”

One of the joys of working at Mona has been having the gallery to himself before opening time.

“To be in there by myself, with my headphones in, roaming around and doing my stretches surrounded by stunning art in this mystical building was surreal.”

And he will be back there in November, for a six-month stint, after appearances in Denmark and Switzerland.

“This whole experience has convinced me that this is what I am here to do. Sit on boxes.”

“And one day TIM will just hang there. Beautiful.”

The Omani Mona Lisa up for auction in Muscat Oman

hi!,I like your writing so so much! It is so difficult to find an expert
on alternative art space space.