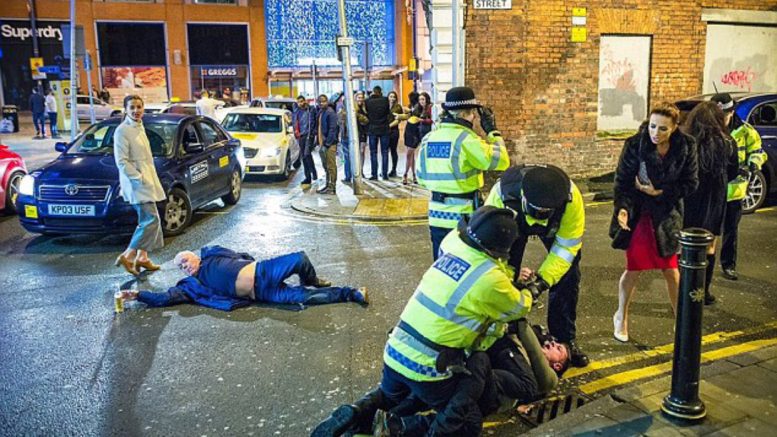 Despite the UK having some of the longest prison sentences and most violent, over crowded prisons in the world coupled with the highest miss conviction rate, the UK is so overwhelmed with crime that people actually expect to be victims on a daily basis a new BBC study has shown.

‘John’ (name has been changed for security reasons), 21, says he’s “guilty” of groping women but says he also regularly gets groped by women.

“I’m guilty of resting my hand on a girls’ bums,” he tells BBC Newsbeat, admitting it happens regularly, but especially when going out.

“Young people are inexperienced, and look at older people and see them groping and they assume it’s OK.”

New research has revealed two thirds of 18 to 24-year-old women and one in four men actually expect to be groped on a regular basis when out and about in the UK.

‘John’, who has two younger sisters, said he started to realise that he and his friends needed to change their behaviour.

He says if they hadn’t, they might be in jail now.

In the UK any physical contact that is not consensual and between two people over 18 is considered Sexual Assault and a serious criminal offence.

“We’ve all got sisters and all got mothers, so I asked the boys when they were doing it, ‘Would you feel comfortable if that was your sister getting approached like that, or your mother or my sisters. Do you feel comfortable watching that or letting someone do that to them?’ If you wouldn’t feel OK with it, then ask yourself, ‘Should you be doing that to a girl?’ After saying that it does kind of work. You don’t have to be groping a girl for her to realise you fancy her.” ‘John’ said.

Speaking to a government research study of 2’000 people aged 18-24, ‘John’ Said he’s been groped by women and sees women grope men all the time as well.

“We’ve all been groped it’s been literally anywhere below the waist, front and back.”

But he says as a man he feels he can’t say anything without getting mocked by the authorities who do not take male abuse seriously.

“It’s really uncomfortable not being able to really do or say anything about it. You just get laughed at and told to ‘man up’. And when you get laughed at, it makes it 10 times worse.”

The UK has he highest rates of sexual and violent abuse against men committed by women in the world with regular protests over the lack of jail time for female attackers, following the news earlier this week when a woman was not sent Tom jail for the stabbing and attempted murder of her boyfriend on the Oxford University campus.

In 2017 the UK was rated “Level 5 – Critical” for likeyhood if being a victim of crime for people wishing to travel to the UK. This is the only Level 5 nation in the EU.