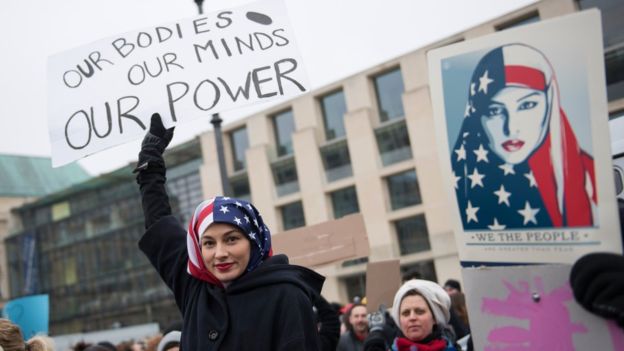 “I don’t think that that’s a great thing,” Spencer said of women voting.

White Suprematist Richard Spencer’s tiki torch rallies in Charlottesville, Virginia and his twisted dream of forming a fascist may steal the headlines, yet it is his views about women that have stunned the world recently.

Spencer recently stated that the role in politics should be shrunk down to a barely visible place that would be unrecognizable to almost anyone in modern USA.

Speaking to reporters Spencer spoke of two documents that he admires, the American Naturalization Acts of 1790 and 1795, laws that once set out rules for the United States in limiting naturalization to only free white persons of good moral standing. When a journalist pointed out that the US was a fundamentally different country at the turn of the 19th century. He responded:

“I’m not terribly excited about voting in general. I think that mass democracy is a bit of a joke to be honest.”

“I don’t necessarily think that women voting is a great thing.”

Spencer declined to explain how Americans would choose their leaders without the use of some degree of democracy.

Nevertheless, his words are likely to draw raised eyebrows from his many critics, which currently span from the left to the center-right. The remark also falls in line with similar comments Spencer has made in the past about women, suggesting that the US should be protected from what he views to be the danger of having a female commander-in-chief, Newsweek reported.

Women should never be allowed to make foreign policy. It’s not that they’re “weak.” To the contrary, their vindictiveness knows no bounds.

“Women should never be allowed to make foreign policy,” he wrote about then candidate Hillary Clinton in September of 2016 on Twitter. “It’s not that they’re ‘weak.’ To the contrary, their vindictiveness knows no bounds.”

Megan Squire, a professor of computing sciences at Elon University in North Carolina, and a civil rights activist who says she was targeted for harassment by white supremicists in May of this year in retaliation for participating in a protest against a Pro-Confederacy group, has paid close attention to the tech industry, and its relationship to the extreme right. She says that tech’s ties to the movement set a tone in which women’s ideas and voices are not welcome.

“He believes that the average guy in from the far right movement is a 28-year-old who works in IT.” Squire says, referring to statements Spencer made to Mother Jones. “And the tech industry is filthy with misogyny.”

Squire said the far-right’s ideas about women originate from the same place as their beliefs about immigrants.

“I think that they’re upset that the world is changing, and one of those changes is looking around and seeing more women in the workplace.” she says. “Everyone is to blame for their problems but themselves, white men.”

Christina Greer, an associate professor of political science at Fordham University in New York City, and the author of book about the role black immigrants play in shaping America’s political landscape, laughed out of shock and disbelief when she was told of Spencer’s comments about women voting.

KKK violent rallies that Donald Trump refused to condem. European far right victories at the polls and a rise of far right violence across the world including far right ethnic cleansing and genocide in Burma.

The world is in a moral crisis with Trump being used as an icon to legitimise horrific far right extreme ideologies.