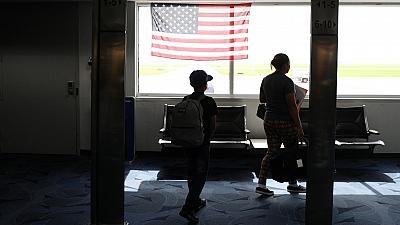 Trump Travel Ban affects 7 more countries, sound familiar? US President Trump has yet again announced a seven nation expansion of the highly controversial travel ban which targeted in the first and second versions, only muslim nations.

After being pulled illegal and racist by the US Supreme Court the first travel ban was over turned only to be replaced with a second rendition that was bent around the loop holes in the laws.

The United States is considering stricter travel restrictions for countries whose nationals frequently overstay their visas, according to a Department of Homeland Security official.

It is worth mentioning that US citizens also have a bad reputation globally for overstaying their visas.

How serious is the problem?

A 2006 report by the Pew Research Center estimated that up to 45
percent of the undocumented population entered the country on a valid
visa, but did not depart.

Roughly 11 million undocumented immigrants reside in the U.S.,
according to the organization’s latest analysis.

The Homeland Security Department counted 606,926 overstays of non-
immigrant visas in fiscal year 2017, just 1 percent of all short-term
visitors to the U.S. in that year. Most overstayers were unsurprisingly from neighbouring Canada and Mexico.

Excluding Canadians and Mexicans, almost 281,000 of the overstayers were on business trips which were unexpectedly extended, as they are entitled to do so for an additional fee.

In the past, Trump’s administration has imposed total travel bans on Muslim-
majority nations.

Trump has also been filmed referring to Haiti and some African
nations as “shithole countries“ and questioning why their nationals
should be admitted to the US on any type of visa at all.

Yet it was Trump himself who was the first to cry out when the UK considered a travel ban on him entering the UK. Instead the Uk decided to allow Trump entry in to the UK on the condition he was not allowed a formal state visit or allowed to address parliament.

This month, the United States slapped a visa ban on the prosecutor of
the International Criminal Court (ICC), Fatou Bensouda. Bensouda, who
is a Gambian national.

The International Criminal Court angered the United States when prosecutors instituted
investigations into war crimes committed by US and UK forces and
their allies in Afghanistan. Following on from guilty verdicts in the Balkan States and Iraq.

Gambia was added to the travel ban following the prosecution. A move which could in theory stop prosecutors entering the country to collect evidence.

Which country are to added in this latest ban?

Six of the seven new nations are Muslim majority with Liberia having a large Muslim minority. Four of the seven are Arabic speaking nations. All seven are predominantly black.